With a deadline within 2 days, we give you our thoughts on what will happen between MLS and its players' union.

With the possibility of strike starting as soon as tomorrow evening out there, MLS and its players' union are pushing themselves to the brink. The writers here at Black and Red United decided to use our regular predictions format to let you know what we think will happen in this negotiation; put your contributions in the comments!

I wish I had some other prediction, but this is how I see things shaking out: The players opt to strike on Thursday. Either thanks to millionaire DPs breaking ranks or the MLSPU support fund drying up, the strike is abandoned before March is through. Ownership hangs onto the current lack of free agency while upping the cap by about $1 million a season while toasting themselves for not just winning this CBA battle, but the next two or three (after all, if the players can't win in the current circumstances, when will they be able to do so?). MLS, in its infinite wisdom, sees a Gold Cup year and thinks "let's maintain the 34 game schedule, and everything that was missed will just be played mid-week!" D.C. United plays mid-week about 75% of the time. MLS re-schedules LA's trip to RFK so that it's a) a home game for the Galaxy again, because why not? and b) the game is less than 24 hours after United plays at New England.

The meetings here in DC will hit fever pitch this week, with players and owners doing all they can to salvage the first weekend of the season. However, in the end, my gut tells me the players walk out on Friday over the lack of free agency and the minimum salary. It sounds like the players have decided that this is the best time possible for them to get the free agency they desire. How long do I think it lasts? Honestly, I think it's a dice roll that there are any games in March. I think it takes a month before either side caves and longer than that to rewrite charters in two countries. I'd probably say the season starts on April 18th, just long enough for United fans to wonder whether MLS reschedules the two games against the Red Bulls that would be lost due to the work stoppage.

Fine. I'll be the optimist. I think they get it done, and the season starts on time. The owners give an inch, allowing for limited free agency for veteran players who have played however many years in the league (8? 9?), but they do so in a way that allows them to keep the veneer of the single entity in tact as well as limiting the ability for free agency to explode salaries. (Seriously, click that link for a thoughtful approach proposed by UCLA Law professor Steven Bank.) The players call it a win and trumpet their new accomplishment along with other gets like higher minimum wage, better personal appearance terms and fees, and very slightly accelerated increases to each team's salary budget. Alexi Lalas waxes poetic on Fox's Sunday night doubleheader. Basically, everything will be rainbows and unicorns for MLS fans.

Some of our writers, however, didn't feel like words could accurately display their feelings on the CBA negotiations. So, here are our predictions in a more visual form. 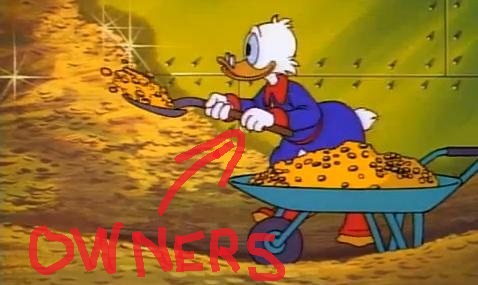 Leanne Elston (with a narrative in image form):

Which means I'm all:

But in the end, they'd better:

Give us your predictions, either in GIF form or in text form, in the comments!