D.C. United versus LA Galaxy lineup: Not much change to be had, unless it's in formation

With limited options, there isn't much change to Ben Olsen's lineup versus the LA Galaxy.

Share All sharing options for: D.C. United versus LA Galaxy lineup: Not much change to be had, unless it's in formation

After a stinging loss to the New York Red Bulls, D.C. United must face another old foe as the LA Galaxy come to town this Saturday. With a number of players still injured or suspended, Ben Olsen will have much of the same options as he did last weekend; they will just have to find themselves in better positions and with better ideas in order to pull the full three points. At least they will be without Robbie Keane and Gyasi Zardes. 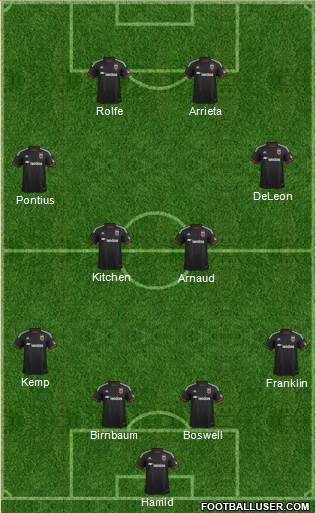 One change that I could see happening is switching Chris Rolfe to forward and Chris Pontius to left wing. United was better offensively when that switch happened against the New York Red Bulls, and Rolfe probably should have scored. Pontius has been put up top because of his strength, but he hasn't really been able to use that. If it doesn't happen from the start, I could see it happening sometime during the match. The other change coming is that Taylor Kemp will replace Chris Korb as the starting left back.

Should the midfield be as overrun as it has been in United's road games, it might be worthwhile to tinker with a formation change. A 4-3-3 could work with the current players, with Jared Jeffrey playing deep in the midfield and Perry Kitchen and Davy Arnaud playing box to box. Bringing in Jeffrey would sacrifice one of Chris Pontius or Nick DeLeon, but without possession neither will have the ability to be effective regardless. This formation might not fit United's best players, but the best players aren't all currently available.

While not fit enough to start, Luis Silva has been fully training in practice this week and so I think he makes his return to D.C. United's bench after a panoply of maladies. He will be joined there by Andrew Dykstra, Jared Jeffrey, Chris Korb, Kofi Opare, Conor Doyle, and Luke Mishu.