D.C. United will be without the services of Dwayne De Rosario, Dejan Jakovic, and Kyle Porter; will this actually help Ben Olsen?

For any normal team, the loss of its highest paid player (and captain), its highest paid defender, and a key sub and spot starter to national team duty might be a big problem. However, 2013 is anything but normal for D.C. United. The loss of Dwayne De Rosario, Dejan Jakovic, and Kyle Porter frees lineup positions to try things for which most fans have been calling, such as an end to the double false nine lineup and trying Conor Doyle as a center forward. 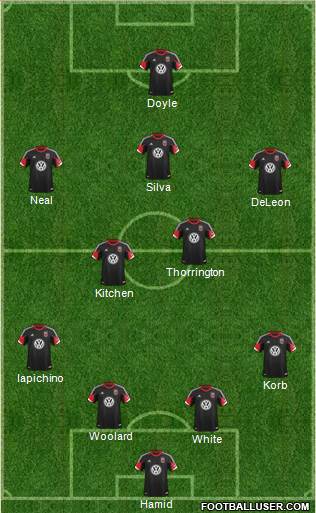 There is no reason not to start Conor Doyle as a center forward, which is what will happen. Look also for Michael Seaton to start and get more time as he is now back from Richmond, along with Conor Shanosky and Andrew Dykstra. As always, Luis Silva will be behind him as the attacking midfielder and Nick DeLeon will be on the right wing. Chris Pontius is finally back in full training, but I see him as a late sub while Lewis Neal gets another start on the left wing. Jared Jeffrey will be another scratch from last week's lineup, as he sprained his ankle against the New York Red bulls, so John Thorrington will take his place in the starting lineup.

The back line will feature at least one change, with Ethan White the likely candidate to step into Dejan Jakovic's starting spot. With Conor Shanosky back from the Richmond Kickers as well, there is now the possibility that both center backs could change, but I don't find that very likely. I will keep predicting Dennis Iapichino to start over James Riley, because if he cannot pass Riley on the depth chart he should be let go at the end of the year as well.

With this lineup, the subs would be Joe Willis, Conor Shanosky, James Riley, Taylor Kemp, Collin Martin, Michael Seaton, and Chris Pontius. What do you all want to see with three key players missing this weekend?