D.C. United vs. Richmond Kickers lineup: The US Open Cup Is All We Have Left To Play For

D.C. United needs to go full bore in the US Open Cup given that the MLS season has devolved into historically bad territory. How can Ben Olsen balance the importance of this game against the three-games-in-eight-days schedule the Black-and-Red are facing?

Share All sharing options for: D.C. United vs. Richmond Kickers lineup: The US Open Cup Is All We Have Left To Play For

After an oh-so-brief flirtation with being merely one of MLS's below-average teams - both the 2-1 loss in Dallas and the 1-1 home draw against KC reminded one of your average 14th-15th place finisher - D.C. United regressed to "top three draft pick" form against the Portland Timbers. Unfortunately for Ben Olsen, the need to change players based on performance (that is, changes that are needed rather than wanted for freshness or a different look) will continue for tomorrow night's US Open Cup match against the Richmond Kickers.

Olsen's selection against the Timbers saw, among other changes, Dwayne De Rosario dropped to the bench for Chris Pontius. The move did not go over well with De Ro, who publicly questioned that decision and how other players are being used. Despite patching things up yesterday in a meeting at RFK, De Ro's argument is a bit hard to take given his disappointing performances thus far.

However, the fact that De Ro hasn't backed up his claims on the field doesn't mean that his main issue - essentially, that he and Carlos Ruiz can start together despite their age and relative lack of mobility - is incorrect. Ruiz gave arguably the single best performance by a United striker in 2013, with several high-quality passes and the kind of intelligent hold-up play that the other competition for the job hasn't provided.

While I can understand Olsen wanting to have a mobile, athletic player (Pontius, Rafael, Pajoy, Townsend) alongside a crafty but slow veteran, for this particular game it might be the best decision. De Ro usually plays his best when he feels snubbed, which he clearly did on Saturday night. Meanwhile, Ruiz has pushed himself atop the pile of strikers by simply being a factor in one game. Yes, that's all it took. :( 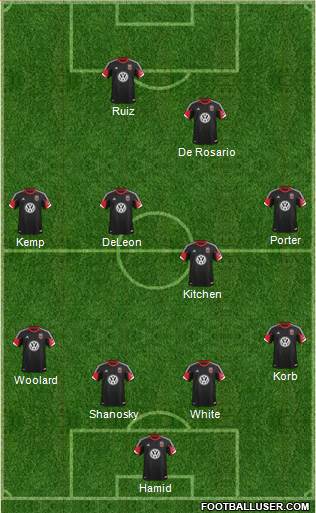 I feel United should do everything to win this game, because a) as bad as the Chicago Fire are, there isn't a single Kickers player that could start for them, and b) the Open Cup is still a possibility for United, while the MLS regular season is going to be a long, miserable march towards an early offseason. I'm staunchly for going all out to win the Open Cup anyway, but this year it's really all we have left that isn't ruined.

That said, players will need to be cycled in for fresh legs, for injury prevention, and for bad form. In the back, I'd like to see Conor Shanosky to make his first-ever competitive start for the club. Shanosky has proven this year and in last season's loan with the Ft. Lauderdale Strikers of the NASL that he is a quality center back for the lower-league level. He's familiar with the Kickers attack, and unlike the other choices he isn't in the midst of the worst form of his life (Brandon McDonald) or dealing with a groin strain (Dejan Jakovic). It's a risk, but he's probably just as ready for this particular game as he'll ever be to make his full debut.

At left back, I'd like to see Daniel Woolard come in and try to regain some confidence while replacing James Riley. Really, it's as much because I'm nervous about Richmond scoring a set piece goal - the Kickers will be putting a lot of eggs in that basket - as I am confident in Woolard. Plus, I want to see Taylor Kemp replace Marcos Sanchez (with Kyle Porter switching wings), and we don't have any other left back options.

Pontius probably shouldn't be pushed too hard given his history of injury relapses, so I'd prefer to see him left out. Ruiz and De Ro might seem slow for a front line, but remember that the USL-Pro is full of all those college players who relied heavily on their athleticism and then didn't get drafted (or did but got cut) in MLS due to their lack of skill and soccer IQ. By playing our two most experienced and skilled forwards together, we'd be giving the Kickers a challenge they won't have seen all season.

I admit that this is a risky approach, but it would be harsh on Ruiz to bench him after he played well, and the only other tempting option would be Casey Townsend. If I were coaching, I'd plan on Townsend being my first sub regardless of whether we're winning (his work rate would keep Richmond from committing numbers forward) or losing (fresh legs up top in pursuit of a goal).

Regardless of who plays, United needs to place full emphasis on this game. The fans deserve that, and quite frankly the players and coaching staff could use a win for their own mental well-being. Losing is a habit, and this might be the single best chance to break it that we'll get in 2013.