If you found this page through SB Nation's series of MLS team previews, welcome! If not, welcome! Here's why we here at B&RU think D.C. United will compete for the Eastern Conference crown in 2013.

The most successful club in MLS history made a return to prominence last season, falling just short of the MLS Cup Final. In 2013, D.C. United are looking to take that next step toward adding a fifth star above the badge. 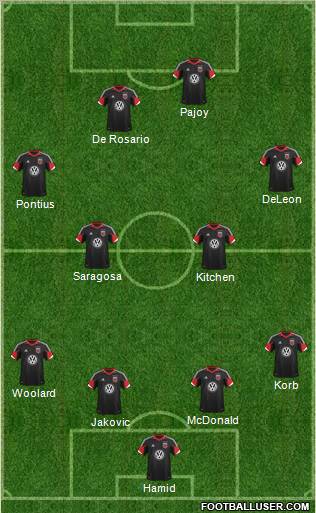 If all goes well, D.C. United will... win the Supporters' Shield on the back of a balanced attack and sturdy defense.

If everything falls apart, D.C. United will... fall out of the playoff positions as they struggle to create chances and score goals while taking a step backward defensively.

Reasoning: The Black-and-Red took a lot of people by surprise last year. After starting the season on the wrong foot with two consecutive losses, United fought their way to the top tier of the Eastern Conference by midseason only to fall to sixth place, outside the playoff spots, after a 3-0 loss at Montreal in late August. When captain, and then-reigning MLS MVP Dwayne De Rosario was lost for the season to an MCL sprain on Sept. 11, things looked bleak for Ben Olsen's side. Los capitalinos would close out the season on a gritty 9-game unbeaten streak before making it to the Eastern Conference Finals.

Having discovered that they can win without the creative presence of their captain, D.C. will have him back in 2013, along with nearly all of the rest of the team's core. The only loss this offseason whose name was permanently written somewhere in the First XI is Andy Najar, who was sold to Belgian champions RSC Anderlecht in January. Even then, Najar spent the bulk of the second half of last year playing fullback, a position where United has a ready replacement - or as close to a ready replacement as a team can have for a unique talent like Najar - in Chris Korb.

Even prior to the injury to De Rosario last season, United had started making a tactical adjustment from a high-flying 4-1-3-2 that created and allowed goals in equally high numbers to a more conservative flat 4-4-2/4-2-3-1 hybrid that focused on defensive stability in the middle and more creativity on the outside through the use of overlapping fullbacks. Outside of a 4-2 win over the Chicago Fire just before De Rosario's injury and the 3-2 win over the Columbus Crew in the home finale though - two games that each saw multiple goals allowed - the system failed to create the chances or the goals that had come more readily for United early in the season. How much of that was down to the system and how much was down to losing De Rosario is a question that will define the year for United.

Nevertheless, 90% of the core that saw D.C. finish second in the Eastern Conference last year is back, and if there's one thing that's defined successful teams in MLS over the last several seasons, it's consistency. Teams that have seen success have been the ones who kept their core together year after year and worked in the pieces to push them that next little bit higher. Just look at the LA Galaxy, Houston Dynamo, Real Salt Lake, Seattle Sounders and Sporting Kansas City, and then compare them with the New York Red Bulls and Toronto FC.

United have emulated the former list this off-season. The core is returning, from Bill Hamid and Brandon McDonald in the back all the way through DeRo and Lionard Pajoy up top. The additions of strikers Rafael - a young DP from Brazil's top flight - and Carlos Ruiz - el Pescadito needs no introduction - will put pressure on hard-working but not high-scoring Pajoy to produce or step out of the starting lineup. Midfielder John Thorrington, acquired from the Vancouver Whitecaps in the Re-Entry Draft, will compete with Marcelo Saragosa for minutes alongside Perry Kitchen in Ben Olsen's double pivot. James Riley will push for minutes at both fullback spots, forcing Chris Korb and Daniel Woolard to step up their games or else face time on the bench.

There is also the possibility for midseason acquisitions, as United have tons of cap space and/or allocation money as well as an unused Designated Player slot. As the Galaxy showed last season when Omar Gonzalez returned from injury after missing the first half of the season - or indeed as D.C. showed years ago with Christian Gomez - adding that last piece of the puzzle during the year can be just as effective as bringing him in during the preseason.

Injuries, however, could once again take their toll on the Black-and-Red. De Rosario, Chris Pontius and Dejan Jakovic all have their own injury histories, and the loss of any of them would be big for United, even with new depth at most positions on the field. Moreover, even with the additions of Rafael, Ruiz and Townsend, the forward position remains a question mark. For all the work that Pajoy put in that allowed Olsen to make the tactical adjustments he needed to make, he's not a forward who has ever scored goals in bunches, and of United's other strikers, only the aging Ruiz (33 years old) has proven himself in MLS. All of that said, I am optimistic about the team's chances to build on a very good 2012 in 2013.

This is a D.C. United team that should find itself in the playoffs come the end of October and, if the forward spot gets worked out, young players like Perry Kitchen and Nick DeLeon continue to grow and a few breaks go their way, could find themselves in serious contention for a record-setting fifth Supporters' Shield.