Fielding a slightly stronger side than we saw in the 1-0 loss to the Columbus Crew six days ago, D.C. United got a 1-1 draw with Swedish top-flight side Malmö FF. Trialist Joseph Nane scored United's goal in the 75th minute, heading in a corner kick from fellow trialist Kyle Porter.

Share All sharing options for: D.C. United Comes Back To Tie Malmö FF 1-1 In Preseason Friendly

Fielding a slightly stronger side than we saw in the 1-0 loss to the Columbus Crew six days ago, D.C. United got a 1-1 draw with Swedish top-flight side Malmö FF. Trialist Joseph Nane scored United's goal in the 75th minute, heading in a corner kick from fellow trialist Kyle Porter. Malmö's goal came in the 28th minute from Erik Friberg, formerly of the Seattle Sounders.

Porter, a new addition in United's preseason camp, has 2 caps for Canada and lined up on the left side of midfield. He spent last season with NASL side FC Edmonton.

The match was eerily similar to last year's meeting with Malmö: In 2012, the game was on February 2nd; this year, it was on the 1st. Friberg scored a goal in the opening half-hour in both games, only for a trialist to equalize for United on a header.

As with last Saturday's game against the Crew, fans had to rely on the tweets of @DCUmatchday rather than watch a video feed. As such, there's only so many impressions one can gather. One example of the game of telephone we're basically playing is the starting line-up. Going with the consistent norm of United's approach to how to write out a line-up, it would be a 4231. However, Casey Townsend was listed as the central attacking midfielder, which is a position I've never seen him play in MLS or during his years at Maryland. As such, United either played a formation that looked like this: 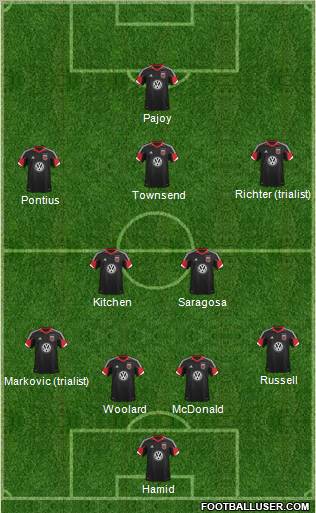 ...or a more standard 442 with Townsend and Lionard Pajoy up front. If it's the former, I suspect that the idea for the first half was to work on the total team shape out of the 4231. Last season, we saw United use Chris Pontius in an unfamiliar central attacking midfield role while trying to grind out road results away. Townsend is a hard worker as a forward and could probably play the role of a proper attacking midfielder in terms of doing the defensive job required out of this formation. That said, I doubt we'll ever see him anywhere but up front in competitive matches.

It would appear that United were outplayed in the opening minutes before working their way into the game. Trialist left back Neven Markovic created a turnover that lead to a shot on goal by Townsend in the 13th minute, and United grew in confidence with Pajoy holding play up to bring the rest of the team into the attack.

However, Friberg would open the scoring soon after United had settled into the game, firing past Bill Hamid - back from national team duty - to make it 1-0 for the Sky Blues (someone tell the New Jersey-based NWSL team that they're not alone in calling themselves that). Subs followed soon after the goal, with Pontius coming off for our new trialist Porter in the 31st minute. It was encouraging to see Pontius get some time in a match, and it's likely that this early substitution was a) to protect CP13 from an injury relapse and b) to give Porter more time to make his case for a contract. Andrew Dykstra also came in for Hamid five minutes later.

Back to Porter for a minute, he's an intriguing trialist. At 23, he just made his Canadian debut in this past week's set of friendlies. He's a product of the Vancouver Whitecaps Residency program, which is both their academy and a PDL team. At 18, he was loaned from the Whitecaps to German 2nd division side Energie Cottbus, where he was a moderately-used substitute for their under-23 team over two full seasons.

Porter returned to Vancouver for their preparations to move from the USL to MLS, but was not offered a contract in their expansion season. He was quickly snapped up by FC Edmonton and has been first-choice there ever since. According to Wikipedia, he has a Canadian mother and a Jamaican father, which (assuming he continues to progress as a professional) may one day make his national team of choice an interesting question. For more on the winger/forward, check out Adam's piece from earlier today.

Returning to the game, both subs made a quick impact. Dykstra punched away a corner moments after coming on, while Porter had a shot tipped wide and served up a dangerous corner kick that nearly found Brandon McDonald. Markovic also did well to earn a free kick after pushing up the left flank again. If the Serb continues to play with aggression up the left side, he may fight his way onto the team (particularly if rookie Taylor Kemp is loaned out to our USL affiliate, the Richmond Kickers).

In the second half, Ben Olsen predictably rang the changes. The remaining nine starters were all replaced as United moved into what was a less ambiguous 442 formation: 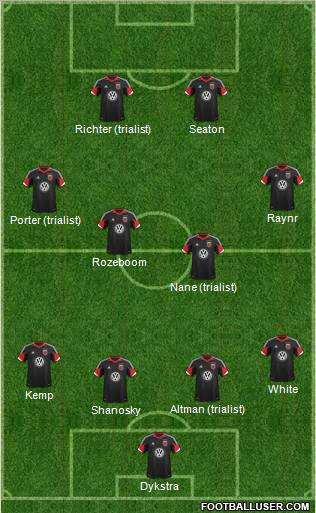 With Malmö also cycling in seven subs (having made one in the first half), the notable events slowed down. Ethan White picked up what turned out to be the game's only yellow card in the 55th minute before our now annual preseason tormentor Friberg was substituted three minutes later.

United stepped up the pressure as the game passed the hour mark, with Porter getting plaudits for looking dangerous on the left. Trialist Kyle Altman made a big tackle in the 74th minute, and only moments later United found the equalizer. Following a counter, a DC corner kick by Porter was headed home by Joseph Nane, the burly former Colorado Rapids defensive midfielder looking for a contract in the nation's capital.

The Black-and-Red nearly made it 2-1 in the moments following Nane's strike, as Lance Rozeboom won a free kick in the 77th minute that Porter just barely missed on from 30 yards. However, that was rather quickly followed up by a few more subs (guest player Vollmer for Ryan Richter in the 80th minute, and guest player Navas for Porter in the 82nd).

Those guest players are in all likelihood Florida Gulf Coast University midfielders Jeremy Vollmer and Andres Navas. For those curious about what the difference between a guest player and a trialist is: Essentially, a trialist is a member of the club during the preseason. He stays with the team at the hotel, the club pays for his food and travel, etc. A guest player is just a player who was used in a preseason game to keep the numbers 11v11. Vollmer and Navas could impress and earn themselves a trial - both were seniors in 2012 - but as of now they were just making up the numbers.

After that, the game petered out. The only notable incident was that Altman and a Malmö player had a clash of heads in the 85th minute that appeared to be at least somewhat serious. Altman got to his feet in fairly short order, but after an evaluation on the sideline was replaced by Richter for the game's final moments.

All in all, the game appeared to be satisfactory from a United perspective. Trialists like Markovic, Nane, Altman, and especially Porter are apparently making cases for themselves to stick around for the whole season, which is just about all you can ask for out of your trialists. Meanwhile, Pontius played half an hour, indicating that he's making good progress from the groin strain that kept him out of Camp Struedel. Olsen himself said that United "got better in a lot of the areas we worked on," which is what you want to hear at this stage of the preseason.

United's next preseason match will be a week from today at 8pm, as the final game of the opening day of the Walt Disney World Pro Soccer Classic. The capital club will take on the Tampa Bay Rowdies of the NASL, with our other Group B opponents - Sporting Kansas City and the Montreal Impact - playing at 3pm. Per this techno-filled preview video, the match will be streamed live on MLSsoccer.com.