Trialist Kyle Porter only played 15 minutes, but it was enough to score a late equalizer for the Black-and-Red. Read on for our impressions from the match with Montreal.

In both teams' last group-stage game at the Disney Pro Soccer Classic at the ESPN Wide World of Sports complex just outside of Orlando, Fla., D.C. United came from behind to draw the Montreal Impact 1-1. Despite United controlling the bulk of possession, new Impact loanee Andrea Pisanu put the Canadian side ahead on an audacious bicycle kick goal from the edge of the box off of a Montreal counter midway through the first half. United continued to control most of the possession through the game, but the starters were unable to draw level before Ben Olsen sent in a mass of substitutes around the 75th minute. One of those subs, trialist Kyle Porter, found the equalizer not too long after coming on after a nice combination with fellow trialist Marcos Sanchez and young DP striker Rafael.

Before we talk about the goal, though, let's back up a bit and look at the start of the game. Olsen sent out a full strength First XI, exactly the lineup many expect him to use March 2 in Houston: 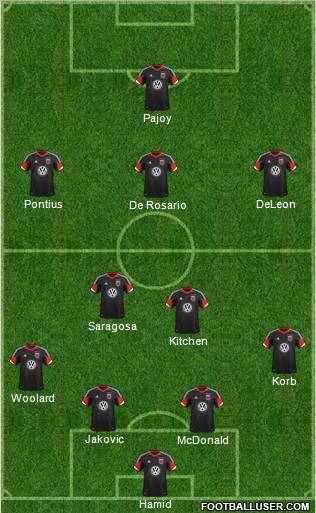 Unlike the last game against Sporting Kansas City, this was less of a 4-4-2 and more of a 4-2-3-1 in both the defensive and offensive phases. Whereas against the Sporks, Dwayne De Rosario worked with Lionard pajoy to pressure opposition center backs, today saw DeRo defending from a position in between Chris Pontius and Nick DeLeon. He also dropped deeper to find the ball and push his teammates forward when the Black-and-Red were in possession.

Interestingly, United pressed very high throughout the first half, frequently with ten players in the Montreal half. With Montreal looking to counter very directly and play men in behind, the high defensive line led to several offside calls against the Impact. In one case, however, it led to a goal. Montreal broke up their right side and a waist-high cross sent in behind Pisanu forced a difficult shot for the Italian, which he nevertheless turned into a highlight reel goal, putting his falling, overhead shot into the upper 90, out of Bill Hamid's reach.

Despite controlling possession for large swathes of the game, United didn't do nearly enough with it, often content to pass the ball around the midfield stripe before eventually filtering it back to goalkeeper Bill Hamid, who would inevitably be forced to send a long ball up the field. After time expired, Ben Olsen expressed his disappointment in the side's effort by calling a practice immediately after the match:

On an individual level, few players stood out. Fullback Chris Korb had some iffy moments in possession early, but settled down to send in a couple dangerous crosses before being moved to the left to make way for new acquisition James Riley, pushing Daniel Woolard to the middle and Brandon McDonald to the bench. Nick DeLeon had the opposite experience, looking very active and very clean in possession early on before fading out of the match in the second half.

The single most encouraging take-away from the match was Chris Pontius, who went 75 minutes, putting in a good shift. He had a few chances early, but the best news is that he was at his strongest during the last ten minutes of his shift, nearly beating three defenders on the run minutes before receiving a pass near the top of the area, turning and unleashing a wicked left-footed shot that narrowly passed over the cross bar.

As I mentioned above, about 15 minutes from fulltime, los Capitalinos made wholesale changes to the lineup, shifting to a 4-4-2 and running out this XI: 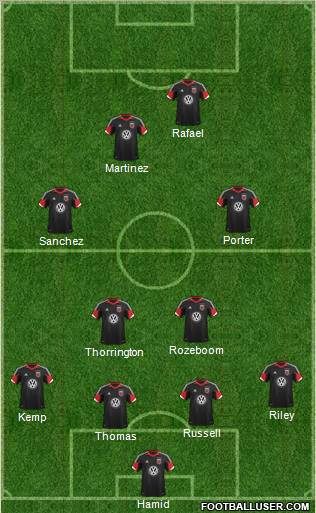 There wasn't much time to take much away from this spell, but a few notes of interest. During this time, the ball was generally in United's half of the field, no matter which team possessed it, but it appeared that Olsen ran out more of an empty bucket than he has in the past, using Kyle Porter and Marcos Sanchez as inverted wingers pinched inside. The bucket differs from United's more typical flat 4-4-2 in that the outside midfielders in a bucket move more centrally when the team is in possession, rather than staying wide. Using the right-footed Sanchez and the left-footed Porter on the opposite sides than usual facilitates this tactic.

Gear up for the 2013 season with Black & Red United's daily countdown series, culminating with D.C. United's season-opener in Houston on March 2.

United's equalizer resulted from good interplay among three of United's front four, including both outside mids. Rafael, Porter and Sanchez exchanged short passes to free up Porter on his weaker right foot just inside the Montreal area. The Canadian trialist sent his shot to former United 'keeper Troy Perkins' right, just inside the far post.

Both Porter and Sanchez used their limited time very well to make their cases for contracts - of course, both would require an international roster spot, of which United will have exactly one once Hamdi Salihi is officially off the books. Shavar Thomas also looked confident in defense while paired with Robbie Russell, even if the Jamaican international (who has a green card by virtue of his American wife) struggled somewhat with longer-range distribution.

It appears that Joseph Nane may have played himself out of contention for a contract earlier this week - he did not appear today. So if we took nothing (or very little) else from today, we at least have that.