Missing five starters and giving minutes to every healthy player and trialist, D.C. United fell 1-0 to the Columbus Crew this morning in the first preseason match for both sides. Crew trialist Sercan Guvenisik scored the game's only goal on a 66th minute penalty kick.

As the game was not streamed or broadcasted in any way - what we know was via the club's @DCUmatchday Twitter account - this post is going to be low on detail. What we do know is that Ben Olsen started what was probably the best available eleven given the absences of Bill Hamid, Dwayne De Rosario, Dejan Jakovic (De Ro played 62 minutes and Jakovic 90 for Canada in a 4-0 friendly loss to Denmark today) for national team duty as well as Andy Najar's continuing loan to RSC Anderlecht and injuries to Chris Pontius (rehabbing his groin strain) and Joe Willis (apparently a new foot injury). Lewis Neal was apparently "rested," which at this point in the preseason points to a minor tweak of some kind that the club simply didn't want to turn into a full-blown injury.

As a result, here's how United started the game in Bradenton, FL: 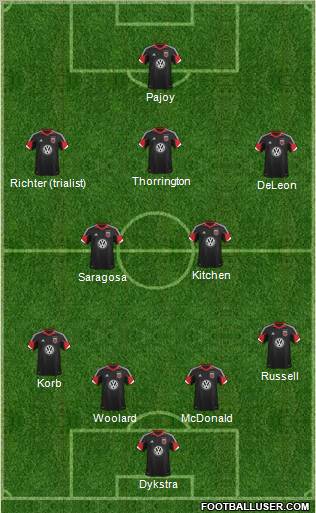 The biggest thing that jumps out to me is that if the club had any worries about Daniel Woolard's concussion, they wouldn't have played him at center back. Olsen said we'd see that at some point this year, and with Emiliano Dudar still in limbo, Woolard may need the practice anyway.

Elsewhere, trialist Ryan Richter popped up on the left side of midfield, further underlining his status as a utility midfielder/forward. Between this game and last season's lengthy trial, I believe he's spent time at every midfield position as well as playing as a forward.

John Thorrington lined up as an attacking midfielder, but this is probably more out of necessity. If Olsen wanted us to play out of this shape, Thorrington would be the best player for the job with De Ro away and Raphael Augusto's loan extension still being worked out. I don't expect to see Thorrington there too often, at least as a starter.

From the way the game was presented on Twitter, it sounded like United had the better of play in the first half but couldn't locate teammates with the final ball. Chris Korb's long ball to Nick DeLeon created an apparent 1v1 opportunity, but DeLeon shot narrowly wide. Korb was also credited with a good cross early in the half, while DeLeon drew a yellow card from Crew left back Tyson Wahl just before halftime. Speaking of bookings, our only yellow of the match was given to Brandon McDonald in the 24th minute.

In the second half, Olsen brought in an entirely new eleven and switched to a 442: 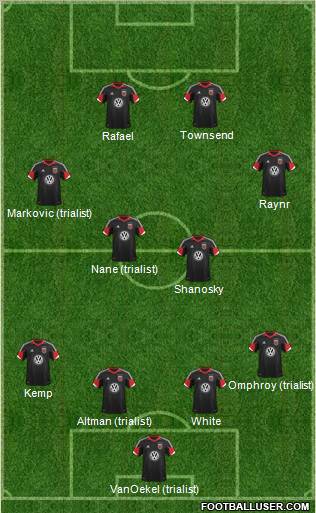 Casey Townsend - who per United's write-up arrived in Florida at 10:15pm last night - played alongside Rafael Gladiador; I'm sure both players at least got to shake hands as an introduction before kickoff. Such is life in the preseason. They were credited with pressuring high up the field, forcing the Crew into lots of long balls rather than playing out of the back.

The game's deciding moment game in the 66th minute. Conor Shanosky was called for knocking down a Columbus player in the area, and trialist Sercan Guvenisik - who spent last year sitting the bench with the San Jose Earthquakes - converted the spot kick past trialist GK Matt VanOekel.

In the 76th minute, Olsen sent on new academy signing Michael Seaton as well as Lance Rozeboom, who is likely very close to being fully recovered from last year's unfortunate ACL tear on the eve of the season. Those two replaced Townsend and Kemp respectively.

My best guess at the lineup at that point, given what is known about the trialists, would look like this: 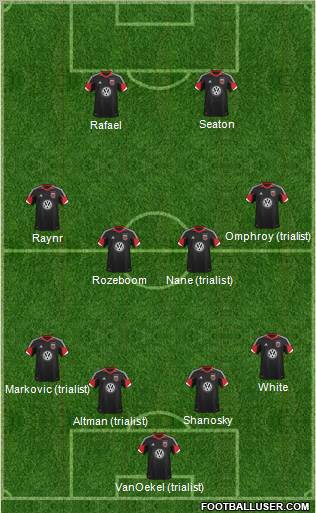 Serbian trialist Neven Markovic is known more as a left back than a left midfielder, but for him and Kemp to get on the field at the same time, someone was going to have to play further up. Omphroy supposedly able to play any right-sided wide position, and we've seen Ethan White play right back, so I figure that supplemental draft pick Evan Raynr switched to the left side. Given that we know Shanosky has plenty of center back experience, it also seems safe to assume he played there rather than United spending time on some kind of 352 that we might never use (in the preseason, team shape is a very big area of focus).

The game appears to have petered out after these subs. Of note: Michael Seaton drew a yellow card on new Crew academy signing Wil Trapp in the 78th minute; Joseph Nane set Rafael up for a shot that got blocked; and a Raynr corner kick caused some chaos before Crew keeper Matt Lampson corralled the ball.

In the end, United fell in what was described as a "typical first preseason game" by Olsen. On the plus side, the Black-and-Red did meet expectations in terms of putting in the work, and it would appear that there were more DC chances than those for Columbus.

United's next preseason match is Friday, February 1st against Swedish side Malmö FF, again in Bradenton. If that name rings a bell, it's because we saw them last year during the preseason as well (a 1-1 draw). The game is scheduled for 11am, with no streaming video mentioned as of yet.