UPDATE: Bowser's quote is actually much more confusing, since she implies that the current site may be used for some other form of development.

"Strikingly isolated is probably the best way to put it," Bowser said of the Buzzard Point site. "You have the Army facility on one side, that is effectively closed off. You have the Pepco facility on the other side. There are some physical barriers to it. I think we need to envision it being different, whether it’s a stadium there or eventual development."

DC Mayoral Candidate (and let's face it, probably should just say "our next mayor") Muriel Bowser toured the proposed DC United stadium site at Buzzard Point, and she did not have the most enthusiastic response:

"Looking at it from this lens, it's strikingly isolated," Bowser said.

Looking at a map of the proposed site, it's going to be a pretty tough walk from either Waterfront (0.6mi) or Navy Yard (0.7mi) Metro Stations to the closest corner of the site. 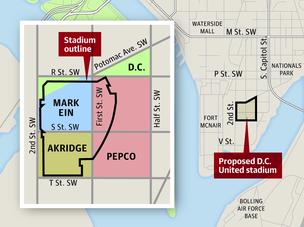 Bowser will be attending two public hearings this week, tonight and tomorrow, to hear comments on the proposed plan. You can be certain a lot of people tonight will be there to oppose any land-swap that could close Reeves Center, so things might get a little contentious.