Travel and climate may have played a role in Jurgen Klinsmann's 23-man roster.

Share All sharing options for: It's Gettin' Hot in Here: America's Steam Team

How much did the geography of the USMNT's upcoming 2014 World Cup campaign affect the 23-man roster selections of coach Jurgen Klinsmann?  Did the likes of Eddie Johnson and Landon Donovan lose their slots thanks to the shape and rotation of Planet Earth?

And, at any given World Cup, there exist always certain conditions.  Say, for example, travel time and climate.

Brazil is a big country - the fifth largest in the world.  Unlike the Olympics, the World Cup isn't city-focused.  These aren't the Rio games.  These are the Brrrrrasil games.  The matches are played in as many cities as the country can spread well-greased construction contracts.  And so the USMNT will play their three games in three different cities:

The good news is that all three cities are in the same half of the country - the north.  The bad news is that the USMNT's training ground is in Sao Paulo.

Sao Paulo is in the south of the country.  The team will stay in the city center at the Hotel Tivoli Sao Paulo Mofarrej.  They'll be using the Frederico Antonio Germano Menzen training center, owned by one of Brazil's powerhouses:  Sao Paulo FC, the Tricolors.  So far, it all sounds fantastic.  But, as their base, Sao Paulo, which is currently experiencing an outbreak of dengue fever and is under threat of a transport workers strike in the middle of the Cup, will be home to USMNT between each game.

Here's what that means:

That's a lot of time spent cramped on an airplane -- almost 9,000 miles before the last group game in a span of less than two weeks.  Each flight is about as long as the flight from Dulles to Denver, give or take.

But all things are relative.  So let's compare this itinerary to their Group G opponents' flight schedules.

Ghana. The Black Stars' base camp is in the north, on the coast, at Maceio's Estadio Rei Pele.  They will fly or drive 270 miles north to Natal to play the USA on June 16, while the USMNT will have flown 1,444 miles.

Portugal. Portugal's base camp is about as far south as the USMNT's, though most of their games are in the south.  They will be staying in Campinas at the swanky Palms boutique hotel within the swanky Royal Palms Resort, using the Moises Lucarelli Stadium as their practice space.  The USMNT's team catches a break with Portugal.  Manaus is a 1,620-mile journey for Ronaldo and Pepe, not much better than the 1,671 miles for the USA.  But the rest of Portugal's matches are just a few hundred mile jaunts from Campinas.  And, really, wherever Portugal goes in Brazil, it will feel like they are the home team.  Portugal is the old country and will be nearly every Brazilian's second-favorite squad.  (Rio was even once the capital of Portugal for about six years.)

Germany. Germany's base camp is outside of Porto Seguro on the east coast, not as far south as Sao Paulo.  They custom-built their own training ground for this World Cup.  It looks like a resort complex from the air.  They will fly 645 miles north to Recife to play the USA on June 26, while the USMNT will have flown 1,316 miles, getting a good glimpse of the multi-million-dollar German compound about halfway through their fifth flight in ten days.

Click on the map to enlarge and read the fine print: 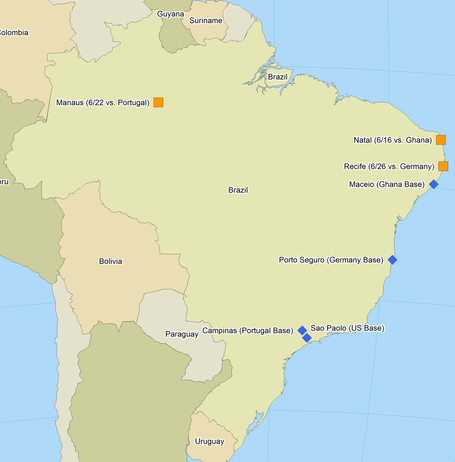 All this flying, especially relative to our Group G opponents, is noteworthy.  It's a disadvantage.  The reduced oxygen pressure after a few hours in the air causes something called hypoxic stress, a drop in arterial oxygen pressure that usually requires a day to fully recover.  In other words, our guys may be playing with less oxygen in their veins than the Black Stars or Die Mannschaft.

Only Italy and Mexico will rack up frequent flyer miles that come close to the USMNT account.

Given the size of the country and the sometimes very large distances between individual venues, it was important to us to minimise travel stress as much as possible.

Acclimatisation and recovery will play a major role at the World Cup and the resort offers ideal conditions to prepare for the early kick-off times and the expected heat and high humidity in Salvador, Fortaleza and Recife.

Oh, did he just mention heat and humidity?  Let's turn to climate.

Sao Paulo, USMNT's home base and training ground, is well south of the equator.  It sits on the Tropic of Capricorn, the dividing line between tropical and temperate climate zones.  Average daily high in June?  An ultra pleasant 72 degrees.  Average June humidity:  a slightly sticky 78%.

But the USMNT's games are nowhere near Sao Paulo.  Every Group G match for the USMNT is close to the equator.  Closer to the sun.  The sunlight on planet earth's bulging midsection rapidly bleaches the plastic on all the shiny new stadium seats.  Without ocean currents and atmospheric winds redistributing the heat from the sun at this point on the earth, the equatorial zone would be too hot for life.

Manaus, remotely situated in the middle of a giant jungle just 214 miles south of the equator, will feature temperatures in the upper 80s at the start of "winter," sometimes spiking into the triple digits, with Amazonian humidity that one writer describes as "sticky at best, steaming and sapping at worst."  A Reuters travel piece puts it:  "When you step off the plane, even the air can seem other-worldly, a hot, humid blast that feels like steam - so much so that physical effort can be utterly exhausting."   Average June humidity for Manaus:  83%, slightly down from May's average of 87%.  Manaus, known for its Amazonian cuisine, its Meeting of the Waters, and its rubber-boom-era opera house, also happens to be the 11th most dangerous place on earth, thanks to nearly 1,000 homicides last year.

Natal and Recife, sitting on the Atlantic Ocean, stay a little cooler than the steam bath in Manaus with daily highs hitting 85 on average in June.  And the average humidity in these coastal cities, during the wettest month of the year (June), breaks the 80% mark.  But no matter how hot it is, no one -- player or spectator -- should take a dip in Recife.  Because sharks.

So the USMNT will go from training in the extreme pleasantness of Palo Alto in May to training in the slightly less pleasantness of Sao Paulo in June, and then play their actual World Cup games in steam rooms.  With this setup, there appears to be no opportunity to condition the body to play 90 minutes of world-class soccer inside the hottest jungle on earth after losing blood-oxygen content to a 1,600-mile plane ride.

The Roster for Three Games

Back to the roster.  There are only three games that matter to the United States.  To advance, Klinsmann must manage at least one win and one draw out of these three, with enough of a goal differential to break a tie in the table. That's a bare minimum.

How do you find sustainable energy and the critical late-game spark under the conditions in which these matches are played?

Do veterans like 32-year-old Landon Donovan make the cut?

What about a vet defender like 32-year-old Clarence Goodson or 30-year-old Michael Parkhurst or 29-year-old Brad Evans?

Of course, older doesn't always mean less fit or less tolerant of steam baths, though there's an unavoidable correlation at some point.  And fitness and acclimatizability (new word!) are not the sole factors driving roster selections (that would be insane).  Being good at soccer plays a role.  Being really good right now plays a role.  Winning "the numbers game" plays a role.  Being on Klinsmann's good side plays a role:  There's the suggestion that Klinsmann thought Donovan, over his World Cup hill or not, mentally uncommitted to the game of soccer, let alone to the rigors of a land war in the Amazon.

So being younger isn't always the ticket for this Amazon campaign.  Not everybody on the final USMNT roster is a kid.  But the veterans who made it may not have been the ones complaining back in March about Klinsmann's alleged overemphasis on fitness and yoga.  Clint Dempsey and Chris Wondolowski are both 31 but on a hot streak from hell (a place that feels slightly cooler than the Amazon).  Kyle Beckerman is 32 - but plays like USMNT's Perry Kitchen with dreadlocks, tough and defensive with a few goals here and there.  Vets Jermaine Jones and DaMarcus Beasley, also both 32, made it through, one of whom has that magic German-US duality that Klinsmann plainly favors.  Goalkeeper Tim-"most of these guys are closer to my son's age than mine"-Howard is 35, but he is not running anywhere.  He just needs to be ready to jump-not-jump accurately at one of Ronaldo's knuckleballs.  Nevertheless, there are in fact only five players on the roster who have played in a previous World Cup, while seven players are younger than 25.

If you're, say, over the age of 28, not a goalkeeper, and not on a proven hot streak, no matter your storied past or the debt the team owes you for qualification, you've probably been cut.  Donovan's recordbreaking 135th goal yesterday came after the cut and was the first game he scored in this season.  Eddie Johnson (age 30) didn't even make the 30-man squad.  An ultra-young, albeit inexperienced future star will get the nod instead.  Klinsmann seems to have made that decision at every available turn.

The USMNT 23-man roster does not consist of our best players -- but they should be the players Klinsmann thinks can play best for us on Earth's equator in just a few weeks, after flying more than a thousand miles for each game, after what looks to be nearly no conditioning for extra hot and humid climates.

Germany's young squad, for example, is so attack-minded that they are likely to leave a hole open for a USA counterattack, if the Americans have someone fast enough and not yet tired out by the boiling conditions in Recife to exploit the opportunity.

Does Donovan make that sprint?  Does EJ?  Does Edu?  We'll never know.  But maybe Green is expected to have the go-power, or Johannsson, or Zusi, 75 or 80 minutes in.  And let's say it happens.  Germany exposes its underbelly to a cross from Zusi to a merciless Johannson.  The game is tied, incredibly.

But here comes Bayern Munich's Thomas Muller, a spritely 24 years of age, playing a false nine.  Whose tropical fatigue gets the better of him, potentially losing track of the attack and the game in the closing minutes:  Goodson or Yedlin?

Klinsmann's roster may not be anyone's obvious dream team.  But maybe - just maybe - some of his selections have something to do with the shape of the earth and where we will be training and playing on it.  It's not our dream team.  Because our dream team won't actually hack it in Brazil.  It's our frequent flyer equatorial team -- our steam team.