Fantasy Focus: Setting the Stage for 2014

Changes are afoot in Fantasy MLS this season. How will you ever prepare?

Share All sharing options for: Fantasy Focus: Setting the Stage for 2014

We went over some of the changes put into effect this year already. The biggest changes on the surface are the change to 18-man rosters from 15, and $120M to spend instead of $100M. The latter change isn't really a change, because both this year and last year we got an average of $6.67M to spend per player. Once you start to put your team together, you're going to discover that the money isn't going as far as it used to. Players all over the place are more expensive than last year. Have a look at this comparison of prices for the best players in scoring last year at the end of last season to their prices this season.

(From here forward, I'm dropping the "M" on prices for convenience) 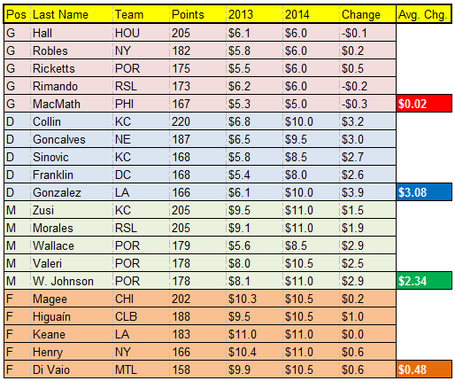 The change is especially seen in the best defenders, and barely a ripple is seen in the goalkeepers. If there were going to be changes, that the effect is felt most with the defenders is not a surprise. On a per player basis, defenders scored the most among field players. Also, that goalkeepers don't cost more is a bit of a surprise.

Moving on, now that you know everybody costs more on average and we have the same amount of money per player to spend on average, what strategy should you use to fill your roster? One thing a lot of people are doing is using a roster spot to stow a super cheap player, which is actually sensible with the extra roster spot for each field position. For instance, the fourth most selected player on defense is Seattle's Dylan Remick ($4.0), selected by 23.7% of all teams at this moment. Not bad for a guy who scored one point last year. Similarly, the second most selected forward is Chivas USA's Matthew Fondy ($4.0), selected by 24.3% of all teams who scored all of 8 points last year. Such a move would free up $2.67 to disperse among other players each time you do it on average. Otherwise, you are looking to make $0.1 here and there by buying in on unpopular players and selling high when other players are adding them en masse. A good opportunity to take that risk would be with players like Michael Bradley ($10.0) and Jermaine Defoe ($10.5) from Toronto, and Dylan Powers ($8.0) from Colorado, who are only selected by 11.8, 11.7 and 2.4% of all teams respectively right now, because they're on bye week one, along with San Jose. If you have the money and space for them now, you might be able to get a bump in worth in round 2.

So who should you select for your team? We'll start with goalkeepers. Here are the top 20 goalkeepers in scoring from last year. The last column is points per $1M. 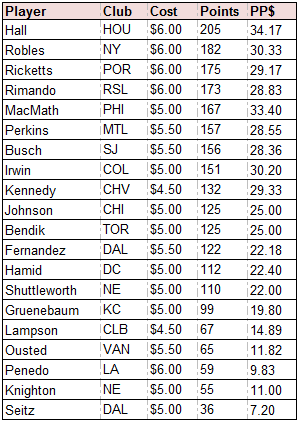 Best Options: Tally Hall has been the highest scoring goalkeeper for two years running. Because there isn't much any difference in money among the top goalkeepers, you could be forgiven for spending the $6.0 on him, especially if you think the Dynamo defense won't miss a beat in the absence of Bobby Boswell (DCU). If you don't want to spend $6.0, Clint Irwin is a great option, as well as Dan Kennedy.

Stay Away From: Zac MacMath, at least until he's announced as the unquestioned starter in Philadelphia.

Sleeper: Eric Kronberg (SKC, $5.0), who isn't actually on this list, because he didn't score any points last year, but is in a battle with Andy Gruenebaum to be the #1 goalkeeper in Kansas City in absence of Jimmy Nielsen. Kronberg is the fantasy favorite to win the job, selected by 7% of teams, more than Greunebaum's 4.7%.

Best DCU Option: Bill Hamid. THEY CAN'T HOLD US BACK!

Now to the defenders. Here are the top 20 from last year: 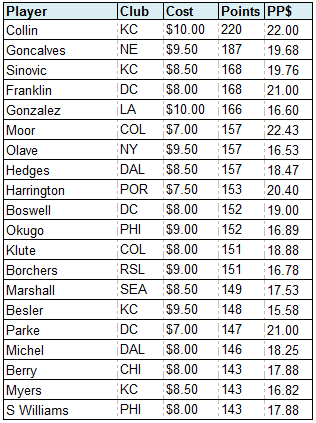 Best Options: If you're not buying Aurelien Collin or Jose Goncalves, the two best defenders last year (pick one), you're in a bit of a spot. The drop to the next highest scorer is 20 points for three guys who scored 166-168 points, all worth $8.0 or more. I'd rather have Drew Moor's 157 points at $7.0 than Seth Sinovic's 168 at $8.5. Also find Michael Harrington for a similar deal.

Stay Away From: Jamison Olave, because I wouldn't spend that much on an injury prone Metros defender.

Sleeper: Andrew Farrell (NE, $7.0), though he was the 22nd highest scoring defender last year, so maybe that's not much of a sleeper. Still, he's likely to be even better this year.

Best DCU Option: Sean Franklin. I'm not hot about Parke and Boswell, and nobody knows much about Christian.

Now, the midfielders. Here are the best 20. 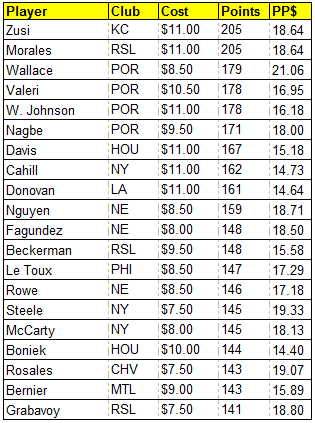 Best Options: Rodney Wallace for those points and that money are really hard to turn down. You should also make room for Diego Fagundez, because he's coming off just his first year of extended action, and his upward trend should continue.

Stay Away From: Mauro Rosales. He's not in Seattle anymore.

Last, and kind of least, the forwards: 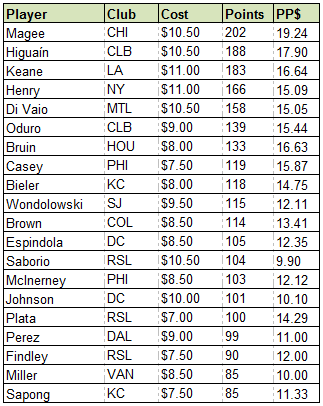 Best Options: Robbie Keane is the best out there until Mike Magee settles his holdout, even more than Federico Higuain. I also really like Alvaro Saborio, depending on how he gets used in RSL. Fun fact: Saborio scored a point every 15.9 minutes. Mike Magee scored a point every 13.8. If Saborio plays consistently, he can score in bunches. If you're not willing to splurge, Will Bruin is probably as good as it gets.

Stay Away From: Marco Di Vaio. Another year older, and out for the first three games of the season due to suspension.

Best DCU Option: Eddie Johnson, who just missed an absolute sitter against Charleston as I wrote this. Whoops.

So there you have it, a little help to set you up for success in your 2014 fantasy season. Probably. Good luck!