MLS Statistical Analysis, 5.2: A Third of the Season Done

We're just a little over 1/3 of the way through the season, and here's how all 19 MLS teams are looking statistically

Share All sharing options for: MLS Statistical Analysis, 5.2: A Third of the Season Done

We've given the teams plenty of time to sort out the statistical anomalies that come with analyzing 4 games worth of data. Now we have a pretty good idea of who teams are, as everyone, prior to Wednesday night's games, had played between 12 and 16 games (which is a ridiculous discrepancy, but that's a post for another time.) Let's get into it.

First up, as usual, is the offensive data, organized alphabetically. 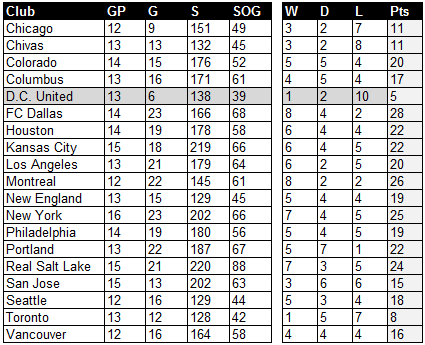 Obviously DCU is apparent as a bad team, and we'll get to them soon. Toronto joins United as the only other MLS team with less than 10 points earned. New York has a slender lead in terms of total goals scored with 23, and they join San Jose and RSL as the only teams to have shot over 200 times this season. RSL is the only team to have more than 70 shots on goal thus far, and they have 88. Let's move on to the percentages, sorted by points per game. 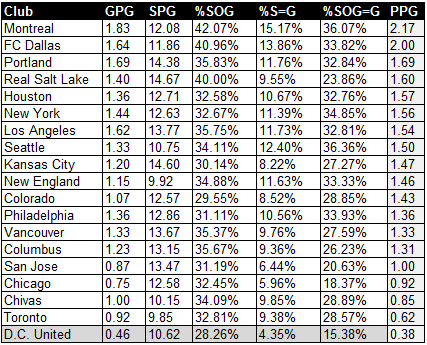 Montreal leads the league in PPG, GPG, %SOG, %S=G, and they're 2nd in %SOG=G. Basically, they're really good offensively, and they've done it despite shooting a 13th ranked 12.08 times per game.

Usually I wait until the end to get to United, but I want to get it out of the way early. Things are bad offensively (and probably defensively as well.) There is only one category in which they aren't last in the league, and that's SPG, which is startling. Their 10.62 shots per game is a marked improvement from the 7.75 they were averaging after 4 games, and it's actually lifted them to 16th in the league. Every other statistic sees United as dead last. They're one of only four teams scoring less than a goal a game (Kevin Payne's Toronto FC, Chicago and San Jose), though TFC (0.92) are 18th and scoring nearly half a goal more than United (0.46). I figured it would be bad. Seeing it on screen is striking.

Other standout numbers include New England, who are in the middle of the pack in terms of PPG (1.46) despite shooting 9.92 times per game (18th) and scoring 1.15 times per game (13th), no doubt boosted by their outburst against the Galaxy. Outside of those categories, they're no worse than 8th in any other. Elsewhere, similar to Montreal, FC Dallas is performing well in every category except for shots per game (11.86) where they're 14th. For some perspective, Dallas shoot 1.24 more times per game than D.C. United, but Dallas find the frame 40.96% of the time, compared to United's 28.26%, which has resulted in 29 more shots on goal this season for Dallas, in just one more game than DCU. I'm not saying that DCU could be near the top of the league if they just found the target more often, but it would be a great start.

On we go to the rankings, organized also by PPG. 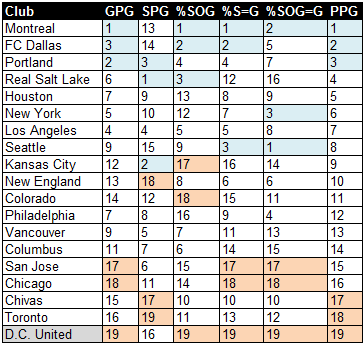 D.C. United: Ugh. Put that on a billboard.

There's much more separation here between the blue and red, signifying the top and bottom 3 in each category, than in the initial Statistical Analysis, which is what I would expect. That said, it's unexpected to see Kansas City be generally bad offensively, yet doing reasonably well in the standings (see: defense and/or goalkeeping).

After their statistically hot start (1st in 3 categories, 7th in PPG) Chivas have plummeted across the board, and they're one of the teams keeping United from being in the red in all categories. Conversely, Seattle has righted its statistically terrible start (17th or 18th in 4 categories, and 17th in PPG).

It's surprising to see San Jose down there near the bottom. The Quakes have had to deal with injuries and absences to two of their most important players (Gordon, Lenhart,) which would directly affect their offense of course. The lesson: Wondo can't do it all himself.

We move on to the defensive data, sorted alphabetically: 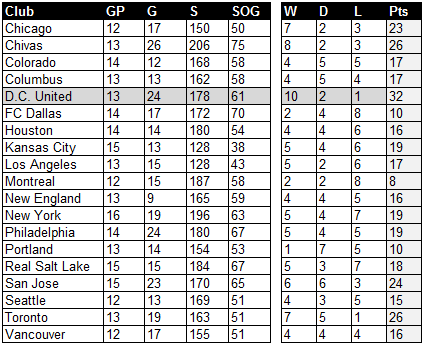 32 points! D.C. United have surrendered 8 more points than any other MLS team. In related news, they've tied for the 2nd most goals allowed with Philadelphia. Chivas have allowed the most goals.

New England are the only team allowing less than 10 goals, having allowed 9. Colorado is 2nd with 12. Just one team is allowing more than 200 shots on goal, and that's Chivas.

Here we go with the percentages: 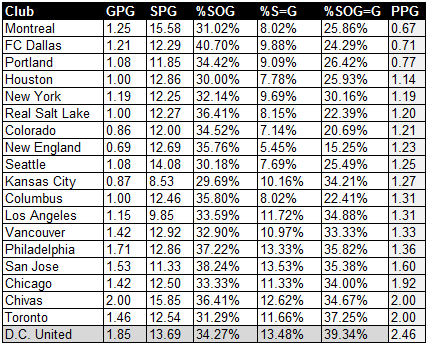 It's good to see that two other teams join DCU in the 2.00 PPG allowed club, with Chicago hanging around awkwardly outside the club, pretending to look at their cell phone so they don't have to go inside. The most interesting stat for United is the %SOG=G number, which is, with few exceptions, the goalkeeping save percentage. The number, 39.34%, is the worst in the league. Over 60% of shots on goal are going in. The team is allowing fewer shots per game than the first analysis (16.75), but the SOG=G% has skyrocketed from 16.67% to the 39.34% now. In essence, D.C. United have seen their collective save percentage drop from around 83% to around 60%. That's... that's bad.

On to the rankings. 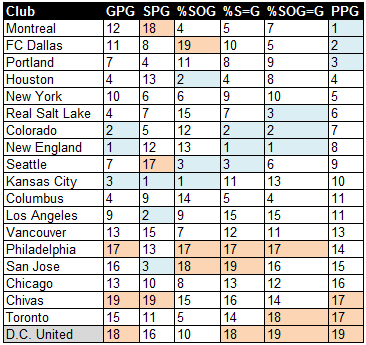 Good news, defense. You're marginally better than the offense.

The one statistic in which DCU don't absolutely stink is SOG%. 34.27% (10th) of shots allowed are on goal. That's essentially the definition of middle of the pack. So they're not allowing a whole bunch of shots on goal, but they're going in at a league worst rate. Ugh.

And how about New England? Three number 1 rankings defensively, despite allowing 12.69 SPG, good for 12th.

Let's move to goalkeeping, because there are a few stars that need addressing: 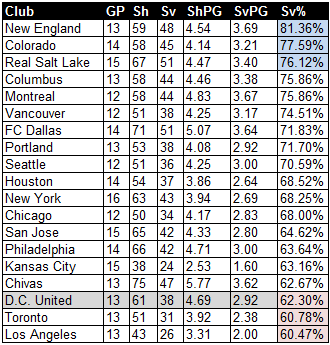 First of all, D.C. have gone from 3rd best save percentage to 3rd worst. Welp. Thankfully, Carlo Cudicini in LA an Joe Bendik in Toronto have been worse.

Bobby Shuttleworth in New England, Clint Irwin in Colorado, and Nick Rimando in Salt Lake have been stars, and Shuttleworth and Irwin are relatively unexpected. Irwin in particular has an individual save percentage of 79, but the overall number is brought down slightly by Matt Pickens allowing 2 goals on 4 shots before getting injured.

Philadelphia's low number is not a surprise, but Kansas City's is. Jimmy Nielsen ended 2012 with a save percentage of 75. Kansas City is not the same down the middle of the pitch as last year, which obviously has something to do with it, but that is still a steep decline.

There it all is. We'll come back to this again probably around game 22.