Seven midfielders scored in double figures this week, and BlasianSays looks at how he's faring overall

Our home team may have been off this week, but there's still a lot to get into in Fantasy Focus. First, we simultaneously recognize the overall and weekly leader, Stallions FC, who scored 94 points and rose to first place overall with a total of 682 points. Graham Zusi (SKC, $10.3M) captained the team and earned 28 points. Kansas City teammate Claudio Bieler ($9.2M) scored twice to help himself to 12 points. Behind him, RSL's Javier Morales ($8.3M) scored one goal himself on the way to 10 points. Stallions have a 12 point lead at the top.

Luis Robles (NY, $5.6M) saved a penalty and kept a clean sheet en route to 15 points, the overall points lead this week, and the season points lead at his position. He's proof that it's possible to be a really bad game goalkeeper, but a great fantasy goalkeeper. Houston's Tally Hall ($5.8M) was close behind with 13 points. Three goalkeepers tied for third at 10 points -- Bobby Shuttleworth (NE, $4.9M), Nick Rimando (RSL, $6.0M), and Clint Irwin (COL, $4.6M).

Eleven teams have two games this week: D.C. United, FC Dallas, New England, New York, Houston, Sporting Kansas City, Montreal, Portland, RSL, San Jose, and Seattle. It is entirely possible that you can have a lineup comprised entirely of players playing twice. With so many teams playing twice, it's important to find the best matchups for the multiple game players. To that end, Raul Fernandez (DAL, $5.7M, 50 points) has what are probably the best opponents this week: home dates with Portland and D.C. United. Luis Robles plays Montreal at home and offensively inept New England away. For defenders, pick one (or two) FC Dallas starters. Seriously. Also, Chris Schuler (RSL, $5.6M, 51 points) is worth a look, with away games against New England and Montreal. Sam Cronin (SJ, $6.4M, 46 points) has games against Toronto at home and Seattle away, and, though this may seem elementary, if you can afford Brad Davis (HOU, $8.9M, 39 points), and he's not suspended for additional games after sitting out last week, he'll be fresh and he has D.C. away, and KC at home. At forward, the reliable scorers generally aren't playing twice. For instance, Bieler is the leading scoring forward right now, and he scored 12 last week, but that came after weeks of 2, 3, and 2 points. He may be worth it just for his Seattle home date, if not the Houston away. If I had to guess, Will Bruin (HOU, $8.7M, 31 points) is probably the one forward to play as your one forward (and really, that's the way to go.)

We're entering week 11, so I think it's a good time to look at how I've done as this blog's Mr. MLS Fantasy. First it's a list of the players I recommended at the start of the season. Some of them were "on a budget" recommendations, but I'm looking at them all equally. The P is for preseason, and the rest is self-explanatory. Players in blue are in the top 10 in their position. 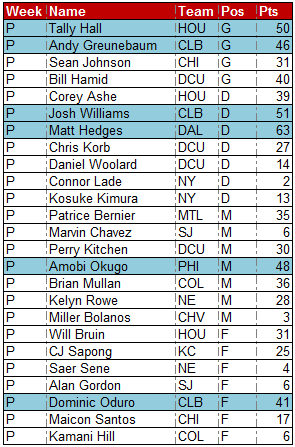 There are some abject failures on here. I give myself a pass for guys like Gordon and Sene because they've been dealing with injuries. Hill hasn't played, and nor has Bolanos, Chavez, or Lade. On the plus side, there are some solid picks there, like Mullan, Bruin (who is just outside the top 10) and Bernier. I'm proud of most of the guys in blue. Hall was a no-brainer, but Okugo, Hedges, and Williams have been stars, with Okugo benefiting from playing defense a lot. Bonus points, man.

Moving on, the following is a list of the players I've recommended by week, with their points scored the following week. The green values are 7 points and above, blue are 4-6 points, and red is everything under 4. Keep in mind that the week number reflects me recommending the player after that week, so Josh Williams scored 1 point in week 2, after I recommended him in week 1. Click to enlarge. 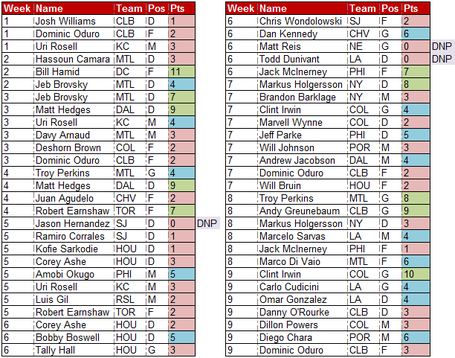 Forwards have generally been a letdown, and that bears out here, with few exceptions. Much of my greater success has come with goalkeepers and defenders -- I guess it's easier to predict when teams will not score vs. when players will. Miraculous. Things have been a bit better since week 8's predictions, and I'd like to pretend that week 5 and 6 didn't happen.