MLS Statistical Analysis, 5.1: Yeah, it's early. So what?

BlasianSays doesn't think it's too early to look at a small sample size and draw grand conclusions, and nor should you.

Share All sharing options for: MLS Statistical Analysis, 5.1: Yeah, it's early. So what?

Most MLS teams have played four games, with the others having played just three, but far be it from me to resist the pull of analyzing the stats for the season to this point and drawing grand conclusions from small sample sizes. It's MLS Statistical Analysis, back for 2013.

For those who haven't seen it before, it's my (possibly) exhaustive look at the league's offenses, defenses, and goalkeeping through numbers, with a special emphasis on D.C. United. As usual, we start with offense. I took the numbers below, organized alphabetically, which were used to make the remaining statistics that you'll see. 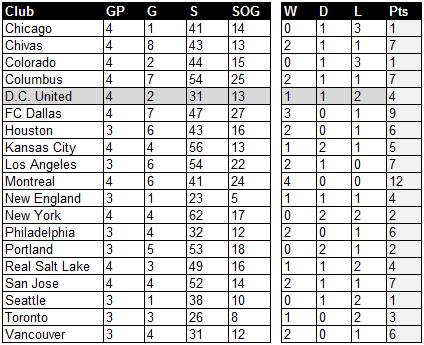 When I first looked at this, two numbers jumped out at me: New England and Toronto have single digit shots on goal. Yes, they've both only played three games, but that's paltry even for that small number of games. You'll notice that D.C. United are highlighted, as they will be throughout the analysis. From these numbers, I calculated the following statistics, sorted by PPG -- Points Per Game. 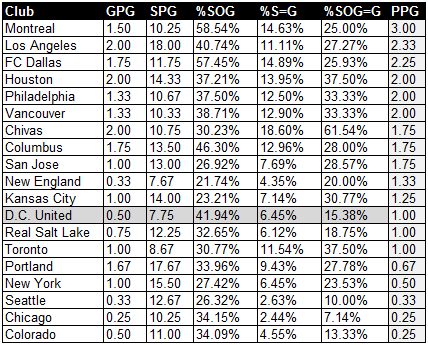 Just three teams are scoring 2 goals per game: Montreal, Houston, and Chivas USA. Speaking of Chivas, you'll see in a moment how they rank against the rest of the league, but note that 61.54% of their shots on goal are going in. Houston are 2nd in that statistic with 37.50% of shots on goal resulting in goals. That's a huge disparity, even for such a small number of games.

D.C. United are only recording 7.75 shots per game, which makes them one of just three teams (New England, Toronto) that are shooting less than 10 times per game. It's no surprise that the team has only scored 2 goals so far this season.

I used these numbers to rank each team from top to bottom, and came up with the chart below. The top three values in each category are made blue, and the bottom three are red. This is also sorted by PPG. 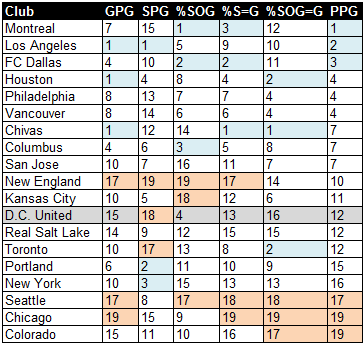 Usually the blue tends to stay toward the top, and the red towards the bottom, and this is a pretty good representation of that. The exception is New England, who haven't performed well offensively, but they're in the middle of the pack in PPG. Usually this means their defending or goalkeeping has been amazing, and we'll see shortly whether that turns out to be the case. They're the worst in MLS in SPG (7.67) and %SOG (21.74%), and they're 17th in GPG (0.33) and %S=G (4.35%).

Chivas are an interesting case because they don't shoot a lot (10.75, 12th), and aren't very good at finding the target (30.23%, 14th) but when they do get it on frame, it goes in 61.54% of the time, as I stated earlier. They're unlikely to maintain this pace. Last season, after 21 games, New York led this category with 37.37% of shots on goal going in. Chivas are going to come back down to earth, but right now they're hot.

D.C. United are not doing particularly well in most categories. Their 7.75 SPG is good for 18th in the league, and they're 12th or worse in all categories except for %SOG (41.94%, 4th.) This will improve, I hope, as after 20 games last year, DCU were shooting 13.1 times per game (7th.) Scoring 0.50 goals per game is not going to cut it, so, in the words of the honorable Lil Jon, this team needs SHOTS SHOTS SHOTS. EVERYBODY! (except you, Pajoy.)

Now, on to the defenses. This is exactly like the offense, except you'll want to look at this and think "[Team] has allowed X." Here's the data, sorted alphabetically. 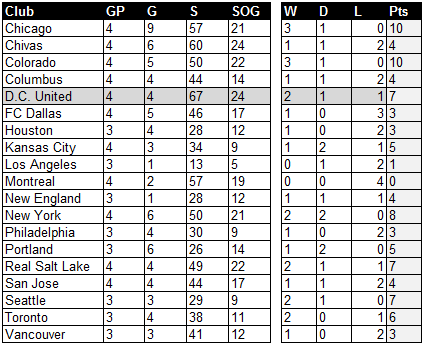 How the heck have the Galaxy allowed just 5 shots on goal, and just 13 shots overall in 3 matches? Five teams allow more shots per game than the Galaxy have all season. Incredible.

New England joins Los Angeles in allowing just 1 goal in 3 games. What that means is 3 Revolution matches this year have seen a total of 2 goals. Gracious.

D.C. United easily have allowed the most shots in the league (67), with 7 more than the next closest competitor, Chivas, and they've both played 4 games. That's not going to look good when the stats below are calculated, sorted by PPG. 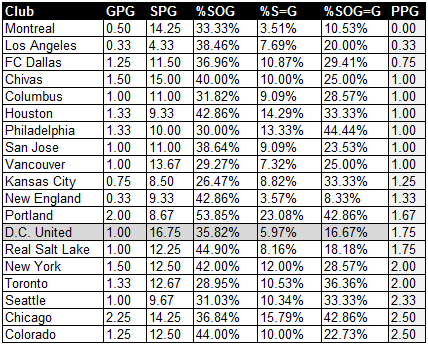 There's Montreal again, allowing generally tiny numbers, except for their SPG (14.25.) You'll see what that means momentarily. They join two other teams in allowing less than 1 goal per game, Los Angeles (0.33), and New England (0.33,) by allowing just 0.50 themselves. Meanwhile, just one team, Chicago, allows more than 2 goals per game (2.25.)

Portland has some big numbers here. First, they're allowing 53.85% of the shots they face to be on goal. No other team allows 45%. Further, they're allowing 23.08% of their shots to result in goals. No other team allows 16%. The first of those two stats is the hardest to qualify. To me, it most likely means the team is allowing uncontested shots. Yes, it could be that their opposition is just very accurate, but of the teams they've played, one is 1st overall in SOG% (Montreal, 58.54%), but the others are 15th (New York, 27.42%) and 17th (Seattle, 26.32%.) The second of those stats is generally down to goalkeeping. If you allow a lot of shots, and your opposition is scoring almost 1/4th of the time they shoot, that's not going to win you games. It's simple.

D.C. United's big 16.75 SPG number sticks out like a sore thumb. It's 1.75 SPG more than Chivas, which in one game may not be a lot, but if it continues over the course of the season, Bill Hamid is going to have to do more than he already has. Speaking of which, United are allowing just 5.97% of shots to be goals. It's not the best in the league, but it's pretty good. Off we go to the rankings, sorted by PPG. 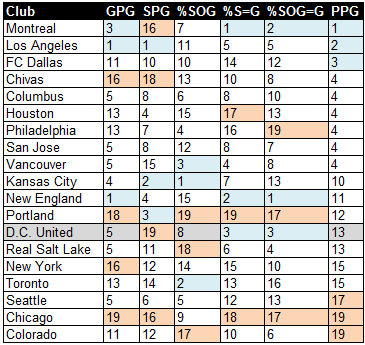 This chart has the reds and blues a little more scattered. Chivas are succeeding despite allowing 1.50 GPG (16th) and 15 SPG (18th). Portland are in the middle of the pack despite poor defensive numbers, and average offensive numbers. I can't actually explain that. The only thing that could be saving them is that they're 6th in GPG scored (1.67.)

New England's good defensive numbers, as presumed earlier, are no surprise. They're 2nd in %S=G (3.57%), and 1st in %SOG=G (8.33%.) %SOG=G is basically goalkeeping percentage, but it also accounts for shots that are saved by players other than the goalkeeper. It doesn't all boil down to Matt Reis, since he's only played in 2 of the 3 games, but I'd suggest that he should get most of the credit.

Let's move on to goalkeeping, sorted by save percentage. 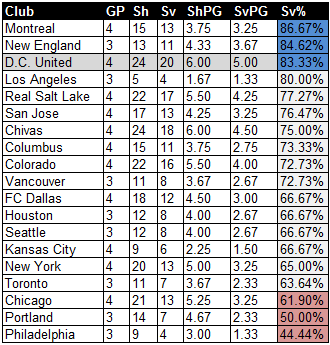 Worse than Chicago's goalkeeping has been Portland's and Philadelphia's. Portland's Sv% is 50%, but Philadelphia's is a comical 44.44% on just 9 shots faced in 3 games. If Zac MacMath faced Bill Hamid's shot count, he'd have allowed 13 goals. That's just bad.

I've talked a lot about Hamid already, so I'm going to skip the focus on the team and move on to the look at D.C. United players individually, sorted by minutes played, with these categories (and you may have to click to enlarge):

Games Played / Games Started / Minutes / Goals / Assists / Shots / Shots on Goal / Goals, Assists, Shots, and Shots on Goal per 90 minutes / and the rest you should know by now 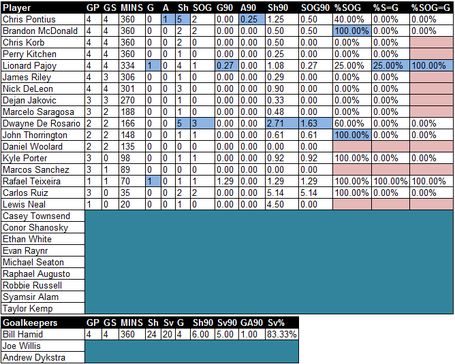 The blue numbers are the team high in each category, the redblocks are because you can't divide 0 by 0, all the players who have no numbers haven't played, and no player playing less than 1.5 games or 135 minutes can lead a category based on average.

The biggest thing to me is that Dwayne De Rosario has played less than half the minutes of Chris Pontius and Lionard Pajoy, but he still is tied for the team lead in shots taken (5), and he leads in shots on goal (3.) He isn't scoring, but when he's been on the field, he's been shooting (2.71 per 90). This needs to get better, and quickly. Meanwhile, the Guatemalan who will not be named has two shots, both on goal (against RSL), in just 35 minutes. I'm not sure how I feel about that.

Admittedly it's hard enough to talk about team stats after 3 or 4 games, and even harder to talk about individual stats when guys just have 350 minutes logged. I'll be back around game 10 or 12 to do this again.