The Eastern Conference was tight in 2012, and this year appears to be even tighter. The bad teams are signing better players, and the top teams have arguably come back to earth a bit. D.C. United will have to emerge from this group if we want to add to our trophy case. Black And Red United will be taking a look at each team in the East ahead of the MLS season. Today: The Philadelphia Union.

Last season: Things got off to an ugly start, as Sebastien Le Toux's rumored trial with Bolton Wanderers turned into a fiasco. Le Toux returned, and the Union immediately shipped him off to Vancouver. This capped off the dismantling of a 2011 playoff team and saw their fanbase turn on Peter Nowak, who seemed to not be aware that fans will question team leadership when they do things that defy explanation. Philadelphia hadn't even taken the field, and things were already going poorly.

Nowak's unnecessary rebuild was a disaster: The Union lost six of their first nine and eight of their first twelve matches in MLS. Nowak was fired - which in turn became a fiasco of its own, with both sides suing each other amidst allegations that the former United coach profited from player transfers - in early June and replaced by his assistant John Hackworth.

Philly's young players seemed to rejoice at the news, but beyond a short burst (the Union won five of Hackworth's first eight games) the good vibes didn't carry onto the field. From August onward, Philadelphia went 3W-4D-8L and only scored more than one goal on three occasions. Despite the presence of one of MLS's best defenders in Carlos Valdes and promising young playmaker Michael Farfan, the Union were only good enough to keep games close. Poor finishing, mental weakness, inexperience, and Hackworth's non-stop tinkering all contributed to what was arguably the most disappointing season in MLS.

This was a surprisingly quiet offseason for the Union given what 2012 should have drilled home: They simply weren't good enough. Losing Valdes would be an enormous blow, but the acquisition of Parke - who wanted to play closer to home - softens it significantly. Philly will still have to play different with Parke, who is less athletic than Valdes but more of an organizing presence. It remains to be seen whether those qualities will work for a team that relied on their Colombian captain to bail them out almost constantly.

The attacking additions were very clearly needed. Jack McInerney is still a promising young player, but his finishing is arguably his worst quality as a striker. That said, Casey and Le Toux both arrive after poor seasons. Casey didn't fit into the gameplan for Colorado, while NYRB never really figured out what to do with Le Toux (big surprise, right?) after getting him from the similarly befuddled Vancouver Whitecaps.

Adu is still technically on the roster, but was told that he could either accept a pay cut or would be free to leave whenever he finds a new club. The Union are currently paying his DP contract while hoping to avoid having to buy him out, while Adu receives faint interest from clubs in Mexico and South Korea while pining for some European team to whisk him away. If this is puzzling to you, join the club. Both Adu and the Union have a lot of things to figure out.

Formation: Despite some talk about using a 4132 and sending out some alleged 442 lineups for the press, it looks like the Union are going to once again call their formation a 433 but actually play 4231 (can you tell how irritating I find this? Because it's super irritating): 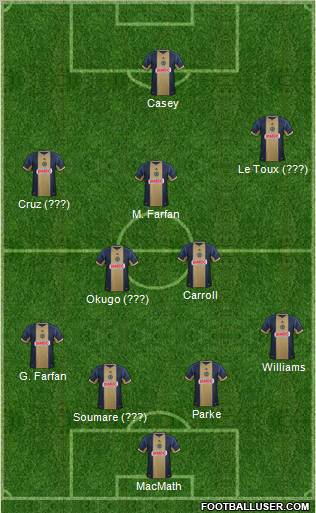 Let's start with the reliable starters: Zac MacMath will continue in goal. Sheanon Williams (RB), Parke (CB), and Gabriel Farfan (LB) will be in the back. Brian Carroll will captain the team from defensive midfield. Michael Farfan will be the preferred playmaker. Le Toux will be out there somewhere. Casey will play his usual target role.

Everything else is a variable. Bakary Soumare is fit now after spending most of last season rehabbing a knee injury, and could start at center back. However, Hackworth correctly sees Amobi Okugo as being a better center back than he is a midfielder, and if Soumare struggles or Michael Lahoud makes a push for playing time, we could see Okugo alongside Parke and Soumare sitting the bench.

The wings are also an issue. Le Toux and Cruz could both play either side, Keon Daniel has been getting plenty of preseason minutes on the left, and Antoine Hoppenot's speed is a difficult weapon to leave out. Even "Marfan" could end up as a winger if Roger Torres follows through on a good preseason and forces his way into the team as the central attacking midfielder.

What makes it worse is that all of this is flexible. The Union could drop Carroll deep and play 4132 with Cruz, "Marfan," and Daniel ahead of him and Le Toux playing alongside Casey. They could actually go 433, and in that case they could bring McInerney in as a wide forward. They could play an empty bucket, with "Marfan" and any number of people cutting inside from the wings. The typical Union madness will continue unabated.

Up front, changes were necessary but whether the right choices were made is questionable. Casey is a lumbering target forward now surrounded by dynamic, almost frenetic players. Will he be the needed counterpoint (a smart fulcrum that can hold possession while the rest of the team buzzes around him), or will he just be a slow player struggling to fit into an attack that is designed to be fast and flexible?

The Union defense will probably still be good. The younger defenders should all get better simply due to experience, and Parke's instructions will probably help them as a group. However, communication is a two-way street, and if Philly's youngsters can't apply what Parke tells them, Valdes won't be there to appear out of nowhere to block a goalbound shot.

The midfield is solid enough, even if their approach to defending tends to consist of "someone kick someone." Carroll hasn't grown as a player in years other than adding more (too much?) of a physical element that he used to lack, but he's still very good as a defensive midfielder. Hackworth's army of wingers give him a potential solution to every problem. Need pure speed? Go with Hoppenot. Need some skill and cleverness? Send out Daniel. Need a player who never stops hustling? Cruz is your man.

If Hackworth can use them correctly - last year it almost seemed like he was just throwing a dart at a wall of pictures - the Philly attack should be able to create some more chances this year. Le Toux is happy in the City of Brotherly Love, and a happy Le Toux usually produces. "Marfan" has a shot at pushing into the USMNT picture if he keeps progressing, and Torres may finally be rounding out the defensive weaknesses in his game that almost saw the Union release him.

So obviously they've got attacking depth. Defensively, the pool is more shallow. Ray Gaddis can fill in well enough at either fullback position, and as I mentioned earlier Okugo should probably end up in the back before too long. After that, though, the cupboard is bare. Draft pick Don Anding is a conversion project as a left back and is supposed to be a great athlete, but MLS has seen plenty of great athletes who were not good soccer players. Chris Albright - yup, still playing - and the rarely seen Greg Jordan are center back depth options, but Hackworth is more likely to bring Williams into the middle and play Gaddis than use either of them.

Expectations: There are a lot of promising and/or good players on the Union, but there are no currently top-tier players here other than Parke. The youngsters are still guys high on potential but in need of development, and the vets have either plateaued or are coming off of poor seasons elsewhere. Even if "Marfan" and Okugo break through to the next level in MLS, this is a team that just lacks the talent to make much noise in an Eastern Conference that looks more competitive than it was last year.

Hackworth's constant tinkering looks like an issue as well, and doing things like touting unheard of draft picks as "MLS ready" only to cut them (and then acting like the press is crazy for being surprised) does not point to brighter days for a Philadelphia Union team that needs leadership and consistency from the bench.

Ultimately, the Union will probably improve some from last year due to their young players growing up and finding more dependable finishers, but it's not going to be enough to get into the playoffs.