The Eastern Conference was tight in 2012, and this year appears to be even tighter. The bad teams are signing better players, and the top teams have arguably come back to earth a bit. D.C. United will have to emerge from this group if we want to add to our trophy case. Black And Red United will be taking a look at each team in the East ahead of the MLS season. Today: The Montreal Impact.

Last season: The Montreal Impact started their first MLS season as most expansion teams do: Struggling mightily. Five points from their opening eight games would have left them badly adrift at the bottom of the standings if not for Toronto FC's dreadful season. After their 19th game, things weren't much better: L'Impact were sitting on a record of 5W-3D-11L, despite putting together a team mostly comprised of MLS veterans and guys with Serie A experience like Marco Di Vaio and (when healthy) Matteo Ferrari.

Making matters worse, the Impact's schedule was front-loaded, so their poor form coincided with a period in which they had often played two or three more games than anyone else in the league. Welcome to MLS, guys!

However, the arrival of World Cup winner Alessandro Nesta - dovetailing neatly with a decision to move Felipe from a linking midfield role into his more natural playmaker's role - sparked the Impact to life. Improbably, Montreal won seven of their next nine - including five straight - and jumped into the playoff race.

Unfortunately, Montreal appeared to peak with back-to-back wins over the San Jose Earthquakes and D.C. United. Teams came to grip with their patient, possession-oriented style of play, while also figuring out that playing speedy forwards and going over the top made life very difficult for the Impact's elderly defense. The result: Montreal faded out of the playoff race virtually the moment they got into it. Their offense dried up, and in the end they took just three points (all from ties) in the final six games.

Bizarrely, the notoriously impulsive Impact front office has added just one player expected to start. That would be Pisanu, last seen scoring a bicycle kick against United in a preseason match. We got a good look at the good and the bad with Pisanu: Plenty of skill and creativity, to be sure, but he also appears to be a pretty unsavory character. Pisanu hit the deck whenever a United player got within three yards, and repeatedly tried to provoke his opponents by running his mouth. Based solely on preseason evidence, Pisanu appears to combine the best and the worst parts of Italian soccer into one package.

The other additions are fairly unremarkable. Romero was on the Argentine under-20 national team back in 2009, but since then has played for three progressively smaller Brazilian clubs. Smith essentially replaces Neagle on the roster, but it's hard to see what Smith - a player primarily known for his speed - brings to the table that Sanna Nyassi doesn't.

The biggest change for Montreal is on the sidelines, where Marco Schällibaum has taken over from Jesse Marsch. Marsch seemed to finally get his team to play the soccer he wanted over the last third of the season, but Impact owner Joey Saputo let him go anyway over "philosophical differences." The fact that MLS neophyte Schällibaum - whose coaching resume includes just about every major Swiss club - has come in and changed next to nothing is a fairly significant surprise.

Formation: Schällibaum has made a change here, but it's a minor one. Marsch's 4231 has been shifted into a 4141, with Pisanu taking Collen Warner's spot and a new role for Davy Arnaud: 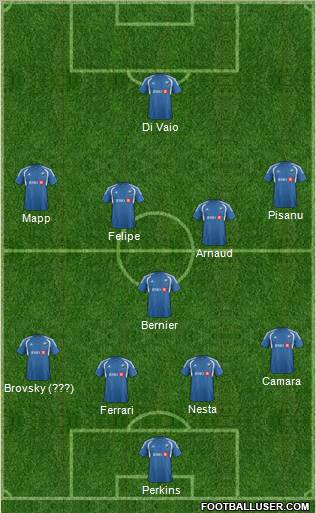 It bears repeating: This team missed the playoffs and fired their coach after one year, yet maintained ten out of eleven starters and kept nine of those starters in more or less the same positions they had in 2012. That's an indicator that Montreal understands that they were on the right path last season, and the head coaching change was probably down to off-field issues (e.g. a rumored issue Marsch took with the number of aging Italian players that the Impact seemingly never tire of signing).

The only starter whose spot is in any danger is Jeb Brovsky, who is only narrowly ahead of Denis Iapichino as the preferred left back (a battle that will probably go on all season).

The changes are pretty easy to explain: Patrice Bernier has moved from his typical holding midfield spot into a slightly more deep-lying orchestrator role; Arnaud has moved from the right wing into a central position that will emphasize his work rate (essentially making him the worker between Bernier and Felipe); and Pisanu comes in on the right side, with Warner dropping to the bench.

The similarity extends beyond the lineup. The Impact will still play a game that emphasizes their collective skill on the ball - Montreal is arguably the best in MLS in terms of overall first touch - and soccer IQ. There isn't much speed or physical power for the Impact, but they're not really interested in using those things anyway. Montreal wants to win games with their brains, through patient passing and movement.

That movement is what makes them a dangerous team. Di Vaio is among the best in MLS in terms of his off-the-ball play (only Robbie Keane can safely claim to be better), and the Impact's ability to keep possession means that they don't miss out on having a big target up top like so many other teams in the league. Di Vaio will probably be caught narrowly offside four or five times per game, but we're talking about a very thin margin between averting a crisis and seeing Di Vaio running with the ball behind the defense.

The key to making this work is the midfield, which is pretty flexible positionally. Pisanu can play as a #10 as well as both wings, Arnaud has spent most of his career wide right, Felipe can play any central role, and Mapp is comfortable switching wings. That fluidity is different from what most MLS teams do, and it's going to cause some problems. If this group can also get forward often enough to combine with Di Vaio, they'll be able to put their advantage in soccer IQ to good use in most games.

Defensively, Montreal might be a little suspect. There is a noticeable lack of speed in every spot, meaning that the Impact can be caught out by an early through ball or if either fullback is beaten down the wing. Even during their hottest stretch of the season, the Impact were conceding goals and they will still heavily rely on possession to hide their lack of speed in the back. Teams that succeed against Montreal will likely be the sides that can convert turnovers into attacks quickly.

Montreal has pretty decent depth. Nelson Rivas will contend for time at center back once he recovers from offseason microfracture surgery, and Hassoun Camara can fill in there as well. Zarek Valentin and Iapichino offer adequate options at right and left back, respectively, allowing Camara the option of filling in for Bernier at defensive midfield if needed. Calum Mallace, a powerfully-built Scot, is also an option to step in for Bernier.

Further forward, Warner and Sinisa Ubiparipovic can cover the two central roles ahead of Bernier, which in turn could free up Arnaud to play on the right (and also Pisanu on the left, if necessary). Romero is probably the second-choice right winger, and both Nyassi and Smith could fill in on the left for the easily injured Mapp. Up top, Andrew Wenger will probably be a regular sub for Di Vaio around the 60th-70th minute mark, while Nyassi will give Schällibaum the option of top-level speed at forward if necessary.

Expectations: The emphasis on the other previews before this one has been on how strong the other teams in the East are. Houston has replaced their departures and improved their depth; Chicago has added more firepower from the midfield, even if they look paper-thin; Columbus has improved substantially after missing the playoffs by one point in 2012.

Montreal showed some intelligence with sticking with a group that showed they can win some games, but the lack of improvement likely leaves them a step behind the top six in the East. Pisanu is potentially a nice addition, but this was a team that needed to improve by more. Consistency will be an issue with certain players - Mapp, Brovsky, and Felipe specifically - and the Serie A vets are all going to have a tough time playing 34 games with the travel and physicality of MLS.

Ultimately, Montreal poses a unique problem for MLS teams in terms of style of play and where their strengths are, but the lack of veterans under the age of 32 and the slow back four are probably too much for the Impact to overcome. Expect them to finish around 7th or 8th once again.