The Eastern Conference was tight in 2012, and this year appears to be even tighter. The bad teams are signing better players, and the top teams have arguably come back to earth a bit. D.C. United will have to emerge from this group if we want to add to our trophy case. Black And Red United will be taking a look at each team in the East ahead of the MLS season. Today: The Houston Dynamo.

Last season: After winning just three of their first ten games, the Houston Dynamo recovered somewhat to end up with a bland 6W-6D-5L record at the 2012 season's midway point. However, almost immediately after that milestone, the Dynamo embarked on a five-game winning streak, a burst that essentially ensured their playoff spot. Their record down the stretch was actually pretty disappointing, as they went just 3W-4D-4L after that hot streak.

The winning streak was sparked by two things: A switch from Kinnear's preferred flat 442 to a 433, and the arrival of Oscar Boniek Garcia. Those two developments went hand in hand: Garcia was active enough to free Dominic Kinnear from having to play a second central midfielder, and also gave Houston a second option at right forward when Calen Carr was out (or being used on the left for Macoumba Kandji). Houston was able to put all their weapons on the field at the same time, and teams were simply overwhelmed.

However, the 433 got stale as most teams figured it out. Kandji's maddening inconsistency always meant that he'd eventually stop playing well, and Carr couldn't trouble defenses as much on the wing as he can down the middle. Fortunately for Kinnear, Ricardo Clark returned to full fitness and allowed another switch. Other than the fateful last 65 minutes of the Dynamo's 3-1 win over United in the playoffs - can't blame them for picking on the speed mismatch that was Kandji vs. Robbie Russell - Kinnear stuck with a 4132 that featured Adam Moffat as the anchor, Clark as a forward destroyer, and giving total freedom to Garcia and Brad Davis. It almost worked, too, if not for that meddling Galaxy...

That's a pretty short list of changes, and you'll notice that most of the players out have been replaced more or less directly by someone coming in. That Houston should opt for stability is no surprise: Kinnear is great at keeping things on an even keel, and the Dynamo roster was not in need of a major overhaul.

The big acquisition is Driver, who is on loan until his contract expires in the summer (at which point he'll sign a permanent contract). While he won't start with everyone in place, he should provide strong cover for Davis and Garcia, who will probably both miss a lot of time on national team duty. Garcia is essential for Honduras, while Davis has a strong chance of being called up for the Gold Cup. Driver will probably also get in as a sub on a regular basis, particularly if Kinnear wants to shift Davis inside to play 4231.

Cummings is also an interesting signing. The Jamaican has looked like a shadow of his old self over the last two seasons, but might be better off with a change of scenery and a better coach. The move was somewhat forced on Kinnear, who lost Carr to a torn ACL in MLS Cup and at the time had no ready-made replacement. Now, though, Cummings will battle with fellow Jamaican Johnson to be the speed option alongside United killer Will Bruin.

Kandji is the one loss Houston hasn't made up for.. it's not that Kandji is a great player - he's too inconsistent and lacks the toughness to get that kind of treatment - but he did offer Kinnear the option of playing a 433. Johnson looked uncomfortable on the left wing during the Combine, and Cummings has never looked happy when used there for Colorado. Driver probably doesn't have the speed for the job, which means that until Carr is fit again, the 433 is probably off the table for Houston.

Formation: Look for the 4132 that Houston used in their non-United playoff games to continue as Kinnear's normal system: 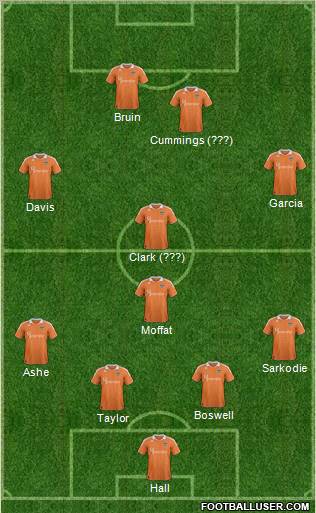 The question over whether Clark stays as a starter or is replaced by Giles Barnes is more down to whether Kinnear wants to take a lot of risks in pursuit of goals or prefers a more secure team. Clark is the safer bet due to Kinnear's pragmatism, but don't be surprised to see Barnes start his fair share of home games. On those occasions, Davis and Garcia will play slightly further back and a bit more narrowly to help make up for the fact that Barnes isn't really interested in defending.

Otherwise, the team you see here is likely to see few changes until Carr returns from his ACL rehab. Cummings will likely get the first shot at partnering Bruin, but if he's still the 2011-2012 version of himself, it wouldn't shock me to see Brian Ching, Cam Weaver (who did well in the CCL last year and has scored several goals in the preseason) or Johnson step in. Houston is clearly better off with a speedy player alongside Bruin, but the Cummings of the past few years has been poor enough that Kinnear will consider a pairing of target men if necessary.

The defense will be a strength as per usual. Jermaine Taylor's versatility means that should either fullback need replacing, it's likely that we'll see him go wide and Brunner enter at center back. Warren Creavalle has also quietly done well when called upon, and could end up pushing Kofi Sarkodie for playing time on the right. Sarkodie came on late in 2012 (much like Chris Korb), but he's not so far ahead of the pack. Kinnear has the luxury to go in another direction if Sarkodie proves to be inconsistent.

As if that deep, talented defense weren't enough, they also have an elite goalkeeper in Tally Hall. Hall's ability to organize his defense is underrated, and he has no real flaws in his game. If anything, they should be able to improve on last year's good-but-not-great 41 goals against (tied for 4th, but way behind the top three).

The midfield should be one of the best in MLS thanks to Davis and Garcia. Everyone knows that shutting down the Dynamo means stopping Davis from crossing, but despite being of merely average speed he always finds space. Garcia, meanwhile, is among the most electric players in MLS and can beat you on the dribble, with a pass or cross, and can also go to goal himself. The possibility of throwing in a clever player like Barnes will mean that no lead is ever safe against Houston.

They're solid defensively as well. The wingers are capable defensively, and Moffat is a bit underrated as an anchor man. Clark's seemingly endless range means any attempt to play through the middle will require avoiding his tackling, and they have depth with Luiz Camargo able to step into either role.

The front line is where Houston is not quite as strong. Bruin is among the best strikers in MLS, but things get sketchy after that due to the injury to Carr. Much was made of the Cummings acquisition, but it's all based on the assumption that Kinnear will just magically make him return to form. There is no guarantee that Cummings will be the player he once was; the Dynamo got him at a discount for a reason.

Ching and Weaver are solid depth, but they don't really compliment Bruin. Ching can function as a set-up target man a la Lionard Pajoy, but Weaver and Bruin essentially want to play the same game. Johnson could end up emerging as the top player in the group, but his preseason has been pretty quiet and it could be a year before he's ready to step into a regular starting job.

Obviously the number of alternatives I've mentioned means that Houston has great depth (arguably the best in MLS). This is a team that got to the CCL quarterfinals with their reserves playing 75% of the minutes, and they added guys like Driver, Brunner, and Johnson to that pool. If a team is built to survive a trying season - and the Dynamo have CCL now and again in the fall - it's Houston.

Expectations: Any reasonable list of MLS Cup contenders simply must mention the Houston Dynamo. They've lost no critical pieces, got deeper, and have several young starters who will keep improving. Just about the only thing that could derail them would be injuries to Bruin or Hall.

That said, I don't know if I expect the Dynamo to contend for the Supporters Shield. They'll have at least six extra games due to the CCL, and in any case they tend to start slowly. Kinnear has specialized in getting his team to be at their best in the fall, and teams like that generally don't end up getting the Shield. Plus, the Gold Cup threatens to see them play for weeks without Davis, Garcia, Taylor, and Cummings (along with possible call-ups for Bruin, Hall, and Johnson, who got capped for Jamaica before he turned pro).

In other words, we're looking at the same ol' Dynamo. They may not rack up 60+ points in the regular season, but any team from the East that wants to win MLS Cup is probably going to have to knock Houston out on the way.