The Eastern Conference was tight in 2012, and this year appears to be even tighter. The bad teams are signing better players, and the top teams have arguably come back to earth a bit. D.C. United will have to emerge from this group if we want to add to our trophy case. Black And Red United will be taking a look at each team in the East ahead of the MLS season. Today: The Columbus Crew

The Eastern Conference was tight in 2012, and this year appears to be even tighter. The bad teams are signing better players, and the top teams have arguably come back to earth a bit. D.C. United will have to emerge from this group if we want to add to our trophy case. Black And Red United will be taking a look at each team in the East ahead of the MLS season. First up: The Columbus Crew.

Last season: Like most mid-table teams, Columbus struggled with consistency. Oddly enough, you can divide their season into fifths pretty neatly (or at least as neat as you can get trying to portion 34 games into five groups). They lost four of their first seven, went on a six-game unbeaten streak, lost four of seven, went on a six-game unbeaten streak, and then finished their final eight games with a win after losing, you guessed it, four out of seven. As a fan of symmetry, I'd like to thank them for their efforts.

The impression the Crew left on most people was that the side they had in the second half of the season was a playoff team. This isn't true, and the misconception mostly comes from how good the Crew looked right after Federico Higuain arrived. Good first impressions go a long way, and in Higuain's first six games he seemed to conjure up a stoppage-time, result-changing goal or assist (often from a free kick or corner) every single game.

After that, however, teams solved Higuain in the run of play and studied up on the Crew's set piece movements, and the goals and assists dried up. Numbers aren't always indicative of much in soccer, but this is one instance where the stark divide tells the tale: Higuain had 3 goals and 6 assists in his first five appearances in MLS, then went over 450 minutes without being involved with any Crew goals. His one assist after his initial burst came in the 3-2 thriller at RFK last October, before he hit Toronto FC up for two goals (note: goals against 2012 TFC don't really count).

Head coach Robert Warzycha and GM Mark McCullers did not fall for the Crew's first impression of quality, and despite one of the best records for a team to miss the playoffs in MLS history, Columbus has engaged in a major overhaul. Everyone in the "notable player out" group was either a starter or in an active battle with another player for a starting job. If the Crew had opted for stability, only Hesmer - who was surpassed by Andy Gruenebaum while recovering from hip surgery that robbed him of his entire 2012 season - would have been sure to sit the bench.

It's a bold move from a club that generally has preferred stability and making due with a less glamorous roster. Warzycha's idea in Columbus is based on finding one top-notch player and surrounding him with the kind of guys who succeed quietly in the attack (see: Gaven, Eddie) and a stout back four.

Things are very different this time around. The Crew have rebuilt the spine of their team: Glauber will take over for the gaggle of oft-injured players who used to vie to be Chad Marshall's partner at center back. There was a similar revolving door at both defensive midfield positions, with Danny O'Rourke's never-ending battle with injuries and the inconsistent form of the rest of the contenders playing a part. Those spots have been taken by high-profile signing Sanchez - formerly a starter for one of Argentina's stronger clubs (the guys who kept Juan Sebastian Veron from signing with us back in 2008) - and possibly Viana, who was brought in to play left back but seems to be sticking as the more purely defensive player in a double-pivot set up.

The Crew also wisely added some speed, bringing in Dominic Oduro to improve upon the departed Emilio Renteria. Oduro is not exactly an artist with the ball, but he'll fit Warzycha's squad better than Duka. His speed will stretch the field for Higuain and Jairo Arrieta, who are undoubtedly the two most important players for the Crew's attack.

You'd think that after bringing in three players with no MLS experience to play roles where mistakes will be punished severely would make the Crew at least somewhat cautious. You'd be wrong, though, because McCullers was talking about winning the East back in January, while Warzycha recently said that on paper, Columbus is as good as they were when they won MLS Cup in 2008. 2008...wait, didn't some team go for a crazy re-build back then and have it blow up in their face?

Formation: Columbus often lists their team as playing 442, but given where Federico Higuain tends to show up and the deep positions of the two central midfielders, it plays as a standard 4231: 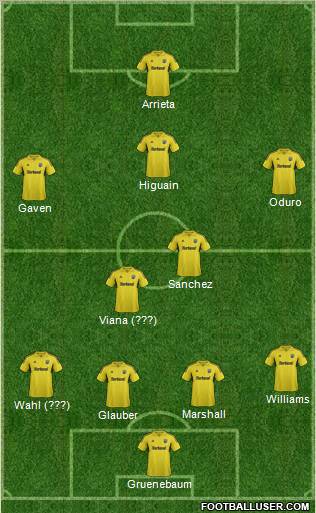 My previous snark about the Crew's optimism aside, it's not a bad lineup. Oduro will provide more of a goal threat than any of the non-Gaven wingers they had in 2012, and while Gaven is not quite as strong on the left as he is on the right, the difference is a small one. Up top, Arrieta provides a confusing lone forward for MLS defenders, as only Marco Di Vaio of the Montreal Impact plays as a lone forward without being more of a tall, strong player.

Like Di Vaio, Arrieta's strength is in his movement; the Costa Rica national team forward is elusive and crafty off the ball. The drawback is that the Crew will always have to play either to his feet or long over the top for him or Oduro to chase down, but if the rest of the team can be careful in possession, it won't be a problem.

A big issue is Higuain's second act. Teams figured out that the more Higuain feels he has to drift into wide positions to find some space, the less effective he is in the run of play. His free kicks are still a danger from anywhere within 35 yards, but last year's Crew had only Gaven as a threat to win those set pieces regularly. Nonetheless, if the Columbus attack is going to consistently worry teams, Higuain is going to have to be more than just a free kick taker.

The central midfield could end up being strong, but it could also be a disaster. We've all seen highly-touted players from leagues that are stronger than MLS end up baffled on these shores, and Warzycha is gambling a big stack on Sanchez and Viana to come through.

If Viana can't hack it, or if he gets moved back to left back, the Crew will be relying on either a) Danny O'Rourke to somehow stay healthy after years of playing no more than two games a month thanks to knee, calf, and other injury problems, or b) Tony Tchani, who is really much more like Sanchez (i.e. a linking midfielder who doesn't just stay deep and destroy, which would be Viana's job in all this).

The new center backs look like a promising combo. If Marshall can avoid more concussion problems - he had a scare just last week, but it turns out he had only hurt his jaw instead - he and Glauber will be an imposing (both are 6'3"), experienced duo. The new Brazilian has played top-flight soccer in Brazil, Germany, England (only one appearance for Man City back in their not-swimming-in-money days, but still), and Romania, so at the very least he's used to adjusting to very different leagues. He could end up struggling, but I have a gut feeling he'll end up being pretty solid.

That contrasts with the fullbacks, who jump off the page as weak points. I mentioned Viana ending up at left back, and it's for good reason: Tyson Wahl is a reasonable player to have making your squad of 18 for games, but he's not a player that would start for a playoff team. Josh Williams, meanwhile, is a natural center back to everyone on earth save the decision-makers at Crew Stadium. Neither player offers much of a threat on the overlap, and both have issues in terms of positioning, agility, and speed.

Depth probably won't be an issue at most positions. There are plenty of wide options: Justin Meram is probably the first choice, while Ethan Finlay appears likely to play more this season. Oduro can fill in as a striker, and 1st round pick Ryan Finley could see time there as well if he keeps on the straight and narrow off the field. Williams and Eric Gehrig can fill in adequately at center back. Obviously fullback is a troublesome spot; if Columbus had good fullbacks on their bench, they wouldn't be starting Williams and Wahl.

Expectations: Columbus should definitely hold all talk of winning conferences and matching recent MLS Cup-winning sides right now, but they do appear to have improved. Even if the new players in the back and in central midfield are no better than the guys they replaced, they will probably build a better team if they can just stay healthy and get into a routine as a group.

That said, a playoff spot for the Ohioans is not assured. The lack of familiarity they'll have to overcome - with MLS for individuals and with each other as a group - likely means a struggle to start the season, and in the East there are already five playoff-quality teams who as a whole are as good as they were in 2012. The Crew could end up getting into the playoffs if every gamble works, but they could also end up going bust.