The Eastern Conference was tight in 2012, and this year appears to be even tighter. The bad teams are signing better players, and the top teams have arguably come back to earth a bit. D.C. United will have to emerge from this group if we want to add to our trophy case. Black And Red United will be taking a look at each team in the East ahead of the MLS season. First up: The Chicago Fire.

The Eastern Conference was tight in 2012, and this year appears to be even tighter. The bad teams are signing better players, and the top teams have arguably come back to earth a bit. D.C. United will have to emerge from this group if we want to add to our trophy case. Black And Red United will be taking a look at each team in the East ahead of the MLS season. First up: The Chicago Fire.

Last season: Chicago spent most of the season barely in the playoff spots before winning seven out of nine games in August and September. However, just as the Fire started to become serious contenders for the Eastern Conference title, they went cold. Their final five games saw a tepid record of 1W-1D-3L, with a squandered home lead on the final day of the season against United dropping them from 2nd place into 4th.

The Fire did get a home playoff game, but it was a one-off against the Houston Dynamo. A disastrous concession moments after halftime saw the Fire down 2-0, and they could only manage one late goal in reply.

The major news in Chicago is that they've remodeled their central midfield with some impressive players. Last year's Fire alternated between a double-pivot 442 and a traditional 4231 depending on whether Frank Klopas thought Chris Rolfe would be better off playing higher up field or not against a given opponent. That double-pivot was made up of the quietly excellent Pardo and club captain Logan Pause.

This year, things are different. The Fire acquired Lindpere for nothing more than an international roster spot, emphasizing how Lindpere's stock fell after struggling to make an impact on the scoresheet for the Red Bulls. Larentowicz cost a bit more - another international spot, allocation cash, and swapping their #11 for Colorado's #30 pick in the draft - but is a big "get" for Klopas and co.

Larentowicz and Lindpere are more of a #6 and a #8, with the Estonian expected to jump into the attack regularly. This should see Chicago play out of a 442 on a regular basis and ensures that, while certainly different in style, the midfield isn't too weakened by the retirement of Pardo.

Elsewhere, Chicago traded the inconsistent and sometimes unhappy Oduro (along with some allocation money) to Columbus for Dilly Duka in a puzzling move. Duka is arguably more of a headcase, and while he is much younger and more skillful, Oduro has a proven track record of scoring goals and is arguably the fastest player in MLS. Duka's record does not at all live up to the hype attached to him through his time in the US youth national team program, and he comes with mental issues to boot.

Chicago replaced the retired Guillermo Franco - you might not have noticed that he was even in Chicago for how little he contributed - with former United striker Maicon Santos in the Re-Entry Draft, and picked up promising Cameroonian 20 year old Yazid Atouba in the SuperDraft.

Formation: As touched on before, Chicago is expected to play a 442: 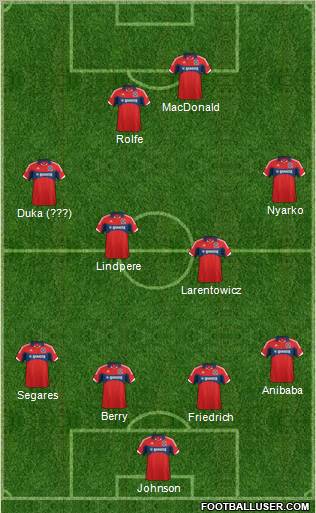 The formation is not unfamiliar for Chicago, but the approach will be different from last year. Pardo was one of the best in MLS at setting his side's rhythm from a deeper position, and the new-look central midfield simply isn't on the level of the vastly experienced Mexican international in that department.

Thus, the game for Chicago will be less about dominating possession and more about creating more chances in a higher-tempo style. Lindpere in particular is going to take a lot of risks with the ball, and that means sacrificing some ability to control the game in favor of hoping to outgun opponents in an up-and-down kind of game. Chicago might be able to get away with that riskier style thanks to one of the stronger back fours in MLS being shielded by Larentowicz.

That change also means less of a burden will be placed on Rolfe to run the attack. In 2012, teams that were physical and played an anchor midfielder in the between-the-lines space Rolfe likes to dip into could shut him down, and that in turn meant Chicago's attack would grind to a halt. A more attack-minded central midfield takes some of the burden off Rolfe's shoulders, making the job of shutting down the Fire attack more complicated.

Still, there are issues. I have strong doubts about Duka's ability to turn his undoubted skill into actual assists and goals, and the higher pace Chicago is adapting this year doesn't suit his style. Klopas doesn't have much choice to play him, though, unless he wants to start Wells Thompson or gamble on Atouba straight away. Central midfielders like Alex or Daniel Paladini are also options on the left, as is playing Lindpere there, but it's doubtful that Klopas gave up so much to bench Duka quickly.

There is also the psychological question that looms over a team that appears set to bench their captain. Pause is a good player capable of playing any defensive position, but he's not going to start over the group in the diagram unless one of them is injured, suspended, or way off their normal form. Without Pause, there's something of a leadership void in the starting eleven. Arne Friedrich has tremendous experience, but he's not a vocal figure outside of his organizational duties. Larentowicz might have to take on this extra responsibility very early in his time in the Windy City.

As for depth, there is only a moderate amount. I mentioned the adequate options at left midfield earlier, and they double as the right wing depth as well. Paladini and Alex are good cover in central midfield, and Pause can step in in a lot of places, but up front things are very thin. Santos faded badly after a great start to 2012 and has proven to be inconsistent in multiple MLS stops. After him, there's teenager Kellan Gulley, who Chicago is looking to loan out for playing time. One injury to Rolfe - a player with plenty of time on the trainer's table in his past - and Chicago will be moving wingers like Nyarko up front, exposing their lack of depth on the wings.

Expectations: If Chicago stays healthy, they should absolutely contend for the Eastern Conference title. The back four is strong enough that a merely "good" offense (rather than a great one) will be enough to contend. However, depth is a major issue on a team starting two attackers - Rolfe and Duka - with lengthy injury histories. The Fire should make the playoffs again, but they're going to need a bit more luck on the injury front than most teams would be comfortable with. Look for Klopas to again make a big move or two during the summer window.