Here's the thing about playing a very conservative line-up in soccer: You can't make mistakes. There is basically no room for a big mistake, because you won't have the quality on the field to score goals. Maybe you stumble ass-backwards into a goal, but how many goals do you really score just waiting for a gift?

If you're going to play defensively, you can't lose focus (word of the day, people) and you can't concede soft goals. It undermines everything. Not only is your plan ruined, but now you need to shift into a totally new gear in the middle of a game. If you want an object lesson on why playing really defensive can be hazardous, look at Chivas USA this season. Great defense, but the cost for that solidity is that they've only got 15 goals in 2012, and you know already that they're not going to the playoffs. It's all about the narrow margins.

D.C. United discouragingly lost 3-0 on the road against the Montreal Impact today despite fielding a team designed to frustrate the home side. Marco Di Vaio's 24th minute opening goal was the Impact's first shot of any kind, and Patrice Bernier made it 2-0 from the penalty spot after Emiliano Dudar was called for being a large man (which is apparently against the rules in Canada). Bernier then popped up with the third goal in stoppage time after Montreal countered with most United players caught desperately seeking a goal.

You and I might complain that D.C. United was hard done by today's referee Matthew Foerster. We can point out that the penalty kick for the Impact was on a shoulder-to-shoulder challenge in which Dudar won the ball fairly. We can lament that Lewis Neal's goal called back for a foul on Chris Pontius should have stood, since Alessandro Nesta clearly shoved Party Boy into Troy Perkins.

We could take up Kevin Payne's opinion that the schedule doomed United today (never mind that Montreal lost at RFK under a far worse scheduling burden, or that life in MLS means weird scheduling for every team every season).

All the complaints, however, don't change the fact that United dropped their guard at a crucial moment, handing the Impact a lead they did nothing to earn on a day where the first goal was always going to be paramount. That loss of focus - feel free to count how many times I use that word in this post - is the issue worth discussing.

The thing about this game is that United started well. The defense-first midfield of Andy Najar, Perry Kitchen, Marcelo Saragosa, and Lewis Neal managed to suffocate Montreal's attempts to go forward, and the back four repeatedly caught Di Vaio offside. The Impact were starting to get frustrated, a weakness they've shown all season. The game was roughly 10 minutes from turning fully in United's favor.

That's where things went wrong. From a simple throw-in, United fell apart. Bernier was allowed the kind of time and space you normally don't get unless you go stand on a field by yourself, and his pass to the criminally unmarked Di Vaio put the Italian veteran through. The shot was still a bit of a tough one - curling the ball around Bill Hamid is no easy task - but for all the Black-and-Red did to prevent this goal, they might as well have taken the shot themselves.

Who gets the blame? Many comments in our gamethread and on Twitter - even neutrals that know the game - looked to Mike Chabala, who was a step behind the center backs and thus kept Di Vaio onside. While it's fair to note that he did keep Di Vaio on, I'd like to diagram why Chabala is at the bottom of the list of guilty parties on this one. 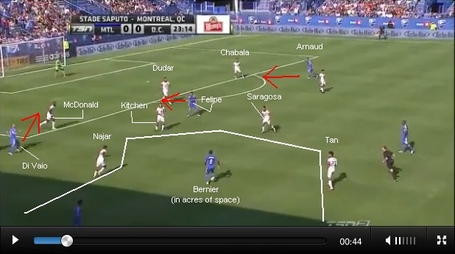 Pardon my MS Paint skillz, or lack thereof. In any case, note that I've drawn three arrows from Impact players, both signifying runs they're threatening to make.

Immediately after this, Dudar and Brandon McDonald take a couple steps forward. It's not an offside trap, but rather an attempt to compress the space on the field. After all, if the midfield is just going to stand off of a key Impact player 30 yards from goal, someone has to do something to limit the room Bernier had to work with.

It's Davy Arnaud's run (not to mention his furious shouting for the ball) that moves Chabala down the ranks of people to blame. United wasn't pulling an offside trap here, so Chabala's job at this moment is still to mark Arnaud. Particularly when Bernier has this much time to pick his head up, Chabala is trapped: If he steps up too high, Arnaud will take off into the space, Bernier - who was eyeing the gap Arnaud was going to run towards - would play the ball, and it's a 1v1 from dead center.

Meanwhile, Di Vaio has noted McDonald is looking at the ball rather than him, while Chris Korb - just offscreen - has momentarily let Di Vaio run on in favor of being the guy to step up and pressure. Korb did his part in pointing out to McDonald that Di Vaio was running towards him. When you're dealing with a savvy player like Di Vaio, this handoff needs to be done right, and McDonald's a) looking the wrong way and b) got all his weight going in the wrong direction. That's why Bernier chose this pass over others.

Nevertheless, Chabala's rock-and-a-hard-place decision to either give Arnaud a free run at goal or keep Di Vaio onside isn't the biggest problem. Neither is the failure to track Di Vaio. Both are significant, but this never becomes an issue if any of several United players steps towards Bernier and applies even token pressure.

Najar, Saragosa, Kitchen - possibly marking Felipe, though Dudar should be calling him off here to free him for a step up on Bernier - and even Long Tan are all standing off a skillful midfielder in the United end. That's inviting disaster. Najar and Saragosa do eventually converge on Bernier, but it's too late. Meanwhile, Felipe's run freezes McDonald, keeping the hole open for Bernier to slot Di Vaio in behind. 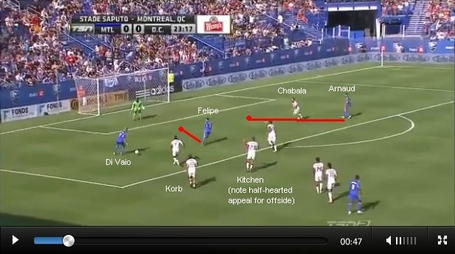 Here we have the scene just before Di Vaio shoots. The red lines are where Felipe and Arnaud are making their runs. Felipe's run mostly serves to distract McDonald from what he should have been doing (marking Di Vaio), but it's Arnaud's run-that-never-was that is key. Chabala marks Arnaud out of the play, but since he was forced to stay that extra step back, Di Vaio is onside. Di Vaio squares himself to the ball and can either pick out Arnaud or curl the ball around Hamid. The latter is the harder thing to do, and Chabala's marking actually forces Di Vaio into the least palatable choice.

Where initially Bernier had three different options to put someone in a great scoring position, United ended up seeing the most difficult of those three potential finishes. In a bad situation, that's the best you can hope for. However, soccer is about preventing the bad situation from ever happening.

As such, Bernier's 60,000 square feet of free space despite four available players is problem #1; McDonald failure to track Di Vaio is problem #2, Chabala's split-second decision to not step up for a possible offside call is problem #3a, and Hamid's slow reaction to the play - he's a stride too far back in this picture, and Di Vaio wisely shoots before he can make up that ground - is problem #3b.

Look at the first picture again. Under respectable pressure, Bernier's choices here should be a 1-in-1000 lob towards Arnaud or a ball - with Tan potentially intercepting it - to Warner. Most of the time, those choices would both lead to a turnover, or at the very least see Warner receiving a tricky pass with both Tan and Saragosa lurking nearby. In other words, a situation where we don't concede, and don't find ourselves at the mercy of an inexplicable PK call (Warner didn't dive, but Dudar got the ball and went in shoulder-to-shoulder; if soccer allows shoulder-to-shoulder tackles, this one is not a foul).

This is in stark contrast to the generally sharp, focused performances we see on East Capitol St. There's a reason why it took the Chicago Fire a rather sublime passing move to score their opener on United: Teams that focus are hard to beat, because they're paying attention to everything.

Today's loss wasn't about effort - if anything, United put in a respectable shift on that front, what with Montreal creating no chances other than their goals in those first 50 minutes - but rather about the mental game. As I said earlier, the Impact were getting frustrated. 5-10 more minutes of the game going as it was, Montreal was going to start losing their focus. Certain players - Warner, who was starting to be out of position and committed a petulant foul before this - already were. The game was about to shift from slightly in our favor to strongly.

Instead of sensing that the crucial change in momentum was about to arrive, United reacted to a throw-in as if the game were already 5-0 in our favor. Everyone went slack, and all the sudden it's 1-0 away on a hot afternoon and on short rest.

It's all about the narrow margins.