The Third Sixth 2012: In Which We Set the World on Fire

Share All sharing options for: The Third Sixth 2012: In Which We Set the World on Fire

We're roughly halfway through the 2012 season, and I, for one, am enjoying it so far. Rumors are swirling of the nearly-completed entry of a couple of new owners, primed to deliver a shiny new stadium for United. Players are coming out of the woodwork to contribute in major ways. Key pieces are re-upping their contracts, citing the team's potential to win silverware. And, oh yeah, D.C. United are sitting top of the Eastern Conference.

Hold on, boys & girls. This is the happiest, most optimistic edition yet of The Sixths.

Standings: As stated in the intro, the Black-and-Red sit first in the East with 33 points from 18 games. Our boys in black are a mere three points behind the San Jose Earthquakes in the race for the Supporters' Shield. Granted, the Quakes have the inside track, having beaten United head-to-head earlier this year. In the East, Sporting Kansas City are a mere point behind D.C. and have a game in hand. The Metros sit third, two points off United's pace, though they have also played one fewer game.

Season Leaders: Chris Pontius has taken the team lead with a career-high nine goals - good for third in the league - and Maicon Santos is right behind him with eight on the year. Dwayne de Rosario and Hamdi Salihi follow with five apiece. In the assists column, DeRo leads the league with his dollar's worth of dimes (that'd be 10). Branko Boskovic is second on the team with four assists, and three players have three apiece: Danny Cruz, Nick DeLeon and Brandon McDonald (?!?). As ever this season, DeRo leads the team in minutes, followed relatively closely by BMac and Daniel Woolard.

MVP of the Sixth: While CP13 took home our player of the month award for June, and DeRo got the nod in May (not just here, but from the league, as well), the MVP of the Third Sixth goes to somebody else. Branko Boskovic started the season dubiously enough, losing his starting spot and causing much debate and hand-wringing about his salary and contract situation. Even before the off-field concerns were hammered out, though, Bodkin forced his way back into the lineup, keying D.C.'s new-found love of possession and putting his hat into the proverbial "best free kick service provider in the league" ring.

Boskovic had a major impact on all six games in this Sixth. Against Colorado, you won't find him on the score sheet, but his hard, headed shot forced Matt Pickens' save and the rebound that was buried by Hamdi Salihi. In four of the other five, he's credited with an assist. The one game in which he didn't start, up in Jersey, United were thoroughly outplayed until his entry in the second half, after which the team nearly completed a three-goal comeback behind Bodkin's string-pulling.

Defining Moment: United played some sparkling football during these past six games. But they also struggled for a couple games following the break for U.S. Open Cup. The first of those harder games, though, against the up-to-then woeful Philadelphia Union, still resulted in a win, thanks to Boskovic's service and Pontius' back-post run. Not to mention a strong, clean-sheet performance from the D.C. defense. Since I can't put the whole game up here, I'm going to call the Pontius goal the defining moment of this Sixth. That was where I, at least, realized that this team is different from the United sides of the past few years. We flipped the script: where in the past United would dominate play and give up a set piece goal late on, here D.C. were outplayed for most of 90 minutes and found a 78th minute winner. This is a team that will find ways to compete and win, sometimes through sheer force of will. Olsen's Army, indeed.

Union play-by-play caller J.P. Dellacamra - fittingly for those who haven't been paying attention and are surprised or confused by United's return to prominence - was taken somewhat unawares by the goal, and it wasn't until the ball was back in the center circle that he and the color commentator realized that United had gone in front. This comment is directed at people who are still talking about the Sporks and Harrisonites as the teams to beat in the East. 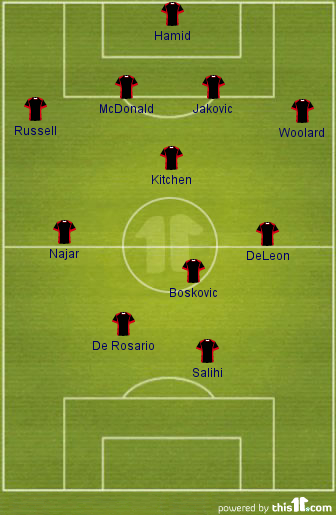 Yeah, you're reading that right, Pontius didn't actually get enough time over the last six games to make the composite. It was close though, with CP13 falling just behind Salihi, Boskovic and DeLeon for starts. This was a really interesting set of games lineup-wise, because Olsen moved parts around virtually every time out. And we still won. Handily. We're talking a +8 goal differential from six games. Half of those games, United won by multiple goals. We saw starts up top from no fewer than five different players, and we saw Andy Najar run out as a right fullback. We even saw Daniel Woolard as a center back.

Positives & Negatives from the Third Sixth: Rather than tell you what I liked about this Sixth (a lot) and what I didn't (less than a lot), I'll open the floor to you readers in the comments. Let's hear it.