The Fifth Sixth: In Which We Observe Consistent Inconsistency

Share All sharing options for: The Fifth Sixth: In Which We Observe Consistent Inconsistency

So, this post was originally scheduled to run after DC United's 29th game, which should have been Saturday's game against RSL. But then Hurricane Irene came along and pushed the Timbers game to next month, leaving six games between now and the end of the Regular Season. Since 34 doesn't really split six ways evenly anyway, I decided to run with it. We've seen hat tricks, big wins and disappointing draws over the last five games.

Step onto my magic carpet, and we'll fly back into the Fifth Sixth.

Standings: United are sitting on 38 points from 28 games, good enough for (again) sixth place in the East. Of course, they do have games in hand on everybody in the league and would be in the second wildcard place based on points per game. United are four points out of first in the East, three points out of the final automatic berth, and one measly point out of the final playoff spot.

Season Leaders: Charlie Davies (11 goals, 1 assist), Chris Pontius and Dwayne De Rosario (7 goals, 5 assists apiece), Josh Wolff (5 and 5), Andy Najar (3 goals, 5 assists). Despite his injury a couple games ago, Pontius has still played more games and minutes for United than anybody else this season (25, 2,114) ; by the next time this feature runs, though, he'll likely have been passed by Kitchen, Simms and Najar.

MVP of the Sixth: That would be league MVP candidate and Golden Boot leader Dwayne De Rosario. Whatever position he's playing, he's made United's transition from defense to attack faster and more deadly. He creates chances. He finishes chances. He just scored the earliest hat trick in MLS history (31st minute). His arrival in the Capital in the McCarty trade has possibly made RFK inhospitable for gingers for all eternity. Perhaps most importantly, he represents another pantsing of the Metros by the DC front office.

Defining Moment: It goes to a multiple goal effort, but probably not the one you're thinking of. And not that other one, either. For both hat-trick-and-wins we've had during this stretch, we've had disappointing, disjointed, dysfunctional losses. We also had a game where we broke a couple streaks, scoring our first goals off a header and through a corner kick; of course, that game also saw Juan Pablo Angel go all Juan Pablo Angel on us, and that, I think, was the defining moment of this Sixth. United are still woefully inconsistent, putting on the autopilot and losing focus at the worst moments. It was especially true in the Chivas USA game, which felt a lot like those Houston and Philly games earlier this summer, but it happened again in the rout of RSL, as Alfonso Saborio pulled one back for the visitors late on. It's got to get fixed if United are going to have anything left to play for after the next six games.

Jump with me, and we'll explore Ben Olsen's First XI, and see what we learned during the Fifth Sixth. 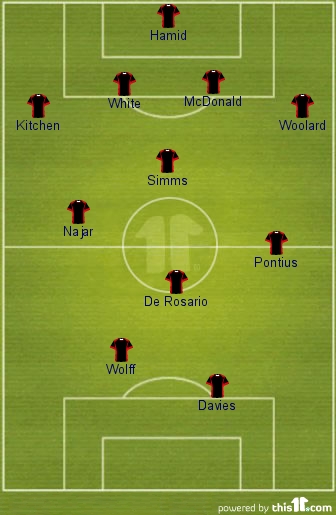 During the Fifth Sixth, Ben Olsen used no fewer than five starting forwards, cycling players through the front line. De Ro actually started as many games at forward as he did in midfield, but because both Wolff and Davies started more games at the position, I slid De Ro back where more than 4/5 of our readers said he should go, at attacking mid. The back line is as expected given Dejan Jakovic's hamstring issues, though I expect Burch to slide into the left back position after his solid performance against RSL. Simms and Najar should be obvious locks at their position, but it will be interesting to see who holds down the left wing position going forward and whether Olsen sticks with DeRo at either midfield or forward or switches him according to the situation.

Positives from the Fifth Sixth:

Scoring Explosion - Two hat tricks, nearly two goals-per-game average. This was the Sixth where United learned they could score in bunches. Davies, Najar, White and, of course, De Rosario all found the back of the net.

Counterattack - The multi-goal games during this stretch came by way of the counterattack, turning defense into offense. Like most teams in MLS, United have some trouble unlocking defenses once they're set up, so Benny gave his charges the instruction to look for opportunities on the break; find the wings or the forwards and put the ball at their feet in space. Seems easy enough, but the team has executed it very well since adopting the strategy after the game in Kansas City (save of course the Seattle loss).

Negatives from the Fifth Sixth:

Focus & Consistency - One day, I hope to be able to put this into the positive column for good. After some positive steps, particularly in defense, the Black-and-Red had a bit of a backslide in the consistency department. The failure to create and finish in KC, the beating in Seattle, and the let-down against Chivas all had something to do with a lack of consistent focus. As the stakes increase and the competition improves, United will have to stay focused for 90+ minutes at a time if they want to make any noise.

Chemistry between our Two Best Scorers - When I ran the post asking where DeRo should be deployed, an unspoken assumption was that Charlie Davies would be on the field. One of the arguments for putting De Rosario in the midfield is the clear lack of chemistry between him and Davies - with Pontius, Najar and Wolff on the field to "translate" between the two, the team can link its offense together better than if DeRo and Davies are strike partners. Of course, there's always the option used against RSL: bench Davies and put a Golden Boot contender on your bench. It would have created quite the Super Sub opportunity had the game gone another way (luckily it didn't).

Overall Impression: It's pretty fitting with the way this season has gone that United are simultaneously a threat to win the East and to miss the playoffs entirely. Somehow appropriate for this talented, inexperienced, custom-built for the future but to win now version of United. Hopefully I'll get to write two more of these posts this year one summing up the final sixth of the regular season, and one for whatever cames may come after.