The Fourth Sixth: In Which We Eye the Playoffs

Share All sharing options for: The Fourth Sixth: In Which We Eye the Playoffs

After Thursday night's draw at Chicago, D.C. United are now fully two thirds of the way through their 2011 campaign. Which is to say that the Fourth Sixth is now officially in the books. If the First Sixth was about rebuilding, the Second Sixth about our young team's early growth, and the Third Sixth about off-the-field moves, the Fourth Sixth was all about trying to put it all together and finally make tangible progress toward this season's stated goal: a Seventh Sixth. Which is to say, the MLS Cup Playoffs. That goal is very much within the team's grasp, even if it's still anything but a sure thing. Let's look back and see how we got here.

Hang on tight, everybody, it's the Fourth Sixth Review.

Standings: Still sixth in the East, but now tied with the Red Bulls on 31 points (behind them only on goal differential), though United have two games in hand on them, and at least one on every team save for second place Philadelphia. The playoff line also happens to run right between us and the Red Bulls - at least until this weekend's games. On the PPG table, though, the Black-and-Red sneak into the second-to-last wildcard spot with 1.35 points per game. (For those curious, Jersey would be the second team out, with 1.24 PPG.)

Season Leaders: Charlie Davies (8 goals, 1 assist), Chris Pontius (7 goals, 2 assists), Dwayne De Rosario (6 goals, 3 assists), Andy Najar (3 goals, 4 assists, 1 big call-up to the Honduran National Team). Pontius has played in all 23 of United's matches this year and leads the team in minutes, followed by Rookie of the Year candidate Perry Kitchen (It's not too early to call him that, is it?), and habitual club ironman Clyde Simms.

MVP of the Sixth: Not only has he led the team's goalscoring efforts since coming down I-95 from the Red Bulls, Dwayne De Rosario has led the league in goalscoring since the swap that sent him to RFK in exchange for Dax McCarty. De Ro has found ways to score, assist, create, destroy, and everything in between during the latest segment of the season, and he's entered the league MVP discussion. Not bad for eight games' work in the Nation's Capital.

Defining Moment: It might have been the 100+ degree draw at the oven against FC Dallas. Or the disappointment that followed on another triple-digit night half a week later against the Revs. Maybe the rebound effort to go on the road and claim a shut-out win in San Jose or the rip-roaring second half at home against Vancouver. But I think it was De Rosario going all Beast Mode (apologies to Michael Morse) on Toronto after United went down to ten men all of seven minutes into the game. A hat trick, a salvaged draw, and his second consecutive Player of the Week provided a wild and memorable night in the friendly confines and showed that DeRo will take the team on his back when necessary, a quality we haven't had in D.C. for a few years.

Inside, we'll do our familiar little song & dance - look at United's most common lineup and the pluses and minuses of these last six games. We'll also glance ahead at the next segment, which gets underway Sunday night in Kansas City. Let's jump. 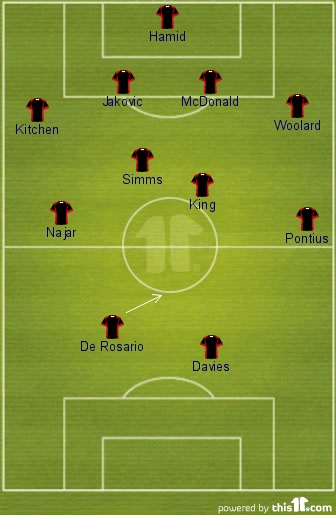 Although United initially plugged Dwayne De Rosario into the top point of a diamond-4 midfield, the last several games saw Ben Olsen move DeRo into the forward line. This meant that the midfield has reverted to a flatter formation, featuring either Stephen King or Santino Quaranta lined up next to (rather than in front of) Clyde Simms. DeRo's starting position is higher up the field in this lineup, but he's still got a free role and frequently finds himself between the opposing defense's lines.

The biggest development, though, is in defense. A central defense that once relied on two rookies earlier in the season now has two experienced (if still young) stalwarts in the newly fit Dejan Jakovic and Brandon McDonald, who was acquired from San Jose by trade on the same day De Rosario joined the team. Their very quick-developing partnership, along with the continued solid play of rookie Perry Kitchen and journeyman Daniel Woolard has anchored United to their best defensive run of form in probably the last couple years.

Positives from the Fourth Sixth:

The DeRo Revenge Tour - Dwayne has managed to score every United goal in the three games played against his laundry list of former teams since we acquired him. And he's accelerating: one goal against New York, followed by two in San Jose and a hat trick against TFC. But he hasn't exactly been quiet in other games, contributing three assists. Dude is out to prove himself after being off-loaded by two different teams since the season began.

Focus - Our top demerit in the Third Sixth was "closing," as several near-wins instead became ties after United gave up late leads. The problem hasn't been wholly rectified - Hamid's red card against Toronto (with an assist from McDonald) and the Jakovic/Woolard fiasco play in Chicago are proof enough of that - but the team's focus has been much improved in the latest stretch of games. They saw off a 1-0 win in New Jersey, and managed to keep

Negatives from the Fourth Sixth:

Whatever happened to Charlie Davies? - Sure, he hasn't be getting the calls as referees overcorrect (and extrajudicially punish him) for his dive in Utah, and sure he doesn't seem suited to the more direct style United have utilized for the past few games, but whatever the reasons, Charlie Davies did not find the scoresheet during this stretch of the season. He's probably in jeopardy of dropping out of the starting XI, possibly as soon as this weekend's game at Sporting Kansas City.

The story of the season - young team rebuilding, then growing up a bit before acquiring the final piece of the proverbial puzzle - just keeps going in stride. United are still on the edge of the playoffs, but have finally gotten their goal differential out of the red - it's now all even for the season. While a lot of people were discounting the Capital Club's playoff chances at the midpoint of the season, the boys in black now look to be a legitimate threat to earn a postseason berth (even if they're still far from a lock).

The next six games are going to be tough: at KC, home to Portland, at Chivas, at Seattle, home to Chivas and home to RSL. Half of these games are going to be "six pointers" against the teams with which we're in direct competition for playoff spots. Results against the Sounders and RSL would be nice, but getting maximum points from the Sporks and Goats will be essential.

Now it's your turn. Will United make the playoffs? Should Tino be featuring more in the First XI? What did I overlook from the Fourth Sixth. Let us hear it in the comments.