Another week in the books. Big wins for DC and Colorado saw them leapfrog a few spots up the table, while a draw has left the Red Bulls facing the prospect of falling behind Toronto. Let that sink in for a minute - it'll still be hilarious. The defending champs are on an absolute tear - taking nearly 87% of the available points from their last 5 - and have to be considered the League's Hottest Team This Week. Lots of midweek games and double-slates this week, so there's the potential for a lot of movement in Week 23.

After the jump, we'll debut another feature - a chart of each team's running points total by game. I know - I'm excited, too.

The idea behind this chart is to look at each team's progress without regard for games played date - MLS' scheduling being all crazy and creating 4-game discrepancies between different teams. So it logs each game played as a win, loss or draw and then charts it accordingly. The easiest way to think about it is as a points "curve" - if Team A's curve is above/left of Team B's, that bodes well for A's chances to finish ahead of B. I'm a bit rushed this morning, so I'll leave the insights to you folks in the comments (click for a larger version). 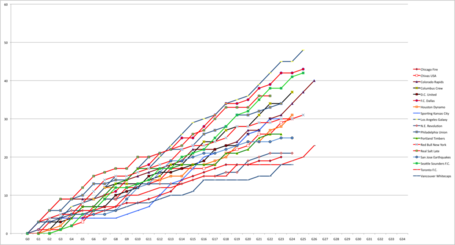 EDIT: Quick insights into the chart. The Galaxy are running away and hiding at the head of the pack. You can see the reason for Colorado's jump in the Power Rankings - they were essentially lumped in with Houston and San Jose before winning four of five. Look who was in last place 11 games into the season - now look at the Sporks in the standings; quite the turnaround. The Eastern Conference is totally up for grabs: only 4 points separate DC from Columbus' pace-setting mark through 22 games. (We're going to ignore for the moment the fact that there are four Western Conference teams who are ahead of the Crew through the same 22-game mark.)