The Second Sixth: In Which They Grow Up So Darn Fast

Share All sharing options for: The Second Sixth: In Which They Grow Up So Darn Fast

D.C. United are now a full one third of the way through their 2011 MLS regular season campaign, which means it's time for another edition of the Sixths , B&RU's look at the most recently completed little nugget of season. You can check our thoughts on the First Sixth  if you're curious (and let's face it, you're curious - be sure to read the comments while you're over there, too), but be sure to come back here to see just how far the Capital Club's young guns have progressed in the span of the last six games.

Standings:  The last few weeks have seen the Western Conference cream rise to the top - United are currently on 16 points, good enough for third in the East. But as of right now, seven of the ten playoff spots would go to teams out West. The Black-and-Red are tied for tenth in the league, and would be the final team to make the playoffs given the new rules that a minimum of three teams from each Conference get in. Luckily, United have at least one game in hand (up to four in the case of the Galaxy) on all but three of the teams ahead of them in the pecking order.

MVP of the Sixth:  As we'll get into below, this segment of the season was all about team play and the group elevating their respective and collective games. I've got to go to the touchline and give my nod to head coach Benny Olsen, whose adjustments in defensive personnel and midfield tactics led to the team's current five-game unbeaten streak. Honorable mentions to Chris Pontius and Perry Kitchen .

Defining Moment:  The team's response to Portland's three bites at the penalty kick apple. I'm sure you all remember - debatable penalty called, Hamid whistled as off his line early to save not one but two Kenny Cooper attempts before Jack Jewsbury finally converts. Even Benny said that, as a player, he wouldn't have been able to stay disciplined enough to see out a victory, but his charges did just that, becoming the first team not called the Portland Timbers to win an MLS league game at Jeld-Wen Field. The big question is whether we'll look back at this as the moment when United served notice to the league that they were for real - sadly, it's still too early to say. 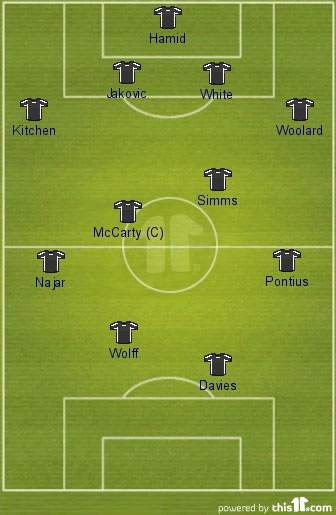 That's some serious turnover from the starters from the First Sixth . And good thing, too - this segment of the season started nearly as poorly as the last one ended, by shipping four goals in a loss to an Eastern Conference foe. Since that time, however, the defense has solidified, allowing four goals over the last five games, none of which has been a loss for the boys in black. This run of form has a lot to do with coach Ben Olsen's decision to play more conservatively out of the back, shifting Perry Kitchen out to the right and inserting the dependable (if not exciting) Daniel Woolard at left fullback.

This period has also seen the team shift  from a more diamond- or "T"-shaped midfield to a flatter shape, allowing Dax McCarty (when healthy) to influence the game from his preferred deeper position while also giving Clyde Simms license to make runs into the attacking third, as he did quite well against the Galaxy. The advanced playmaking responsibility (if you can call it that) has fallen to Josh Wolff, who increasingly is dropping off of the front-line to play provider to Charlie Davies up the middle or the two wingers making runs from the outside. I wouldn't be at all surprised if we're starting to see United described as playing a 4-4-1-1 by the midway point of the season.

Positives from the Second Sixth:

Focus  - Chest pointed out after the First Third, and quite correctly, that focus was a weakness for this young United side through the first six games of the year. You could count on somebody falling asleep on a set piece and leaving their man unmarked, or on nobody being able to remember that there's no offside on a throw-in. The same was especially true through the seventh game - the loss at Houston - as well, but through the three-game homestand and two-game trip to the west coast, the team has made it a point to retain focus on defense. The results? A win in the home of the Set Piece Champs of MLS and a shut-out of the Beckham-served Galaxy.

Consistency  - This is in large part another product of the team's emphasis on staying focused for 90 minutes. In the span of a week during the First Sixth, United went from a 3-0 road win to a 4-0 home loss - the Black-and-Red were the very definition of inconsistent. Not so during this five-game (and hopefully counting!) unbeaten streak. They haven't always gotten the shut-out, but the effort and performance were there from kickoff to the final whistle. Hell,even in the three draws during this Sixth - Dallas, Colorado, at L.A. - there's little question that United was the better team, or at least had the better of the chances. That's five consecutive solid-or-better performances for D.C. United. I think you have to look back at the 2007 Supporters' Shield winning side to find the last time you could honestly say that.

Team Play  - D.C. United are playing as a group. They're compact on defense and fighting for each other to win battles all over the field. It's awesome to see that back at RFK. Even though they ditched the diamond-like formation, United are playing a lot like the allegedly superstar-less Real Salt Lake (who are remarkably vulnerable without their injured don't-call-him-a-superstar playmaker Javier Morales ). What I mean is that the team is the star. Looking up and down United's roster, there's a lot of talent, but much of it has yet to be realized or is at the beginning of a downslope. They shouldn't be outplaying the Galaxy in Carson, especially not with a starting XI that omits McCarty, Jakovic, and Davies. Credit to Benny Olsen for getting buy-in from a team that could have easily come into the season jaded and cynical.

Negatives from the Second Sixth:

Scoring  - It's a difficult thing, given limited personnel, to get better at defense without sacrificing something from the attack, and United are no different. Their output over the last six games dropped by a third of a goal per game, and the team actually has a -1 differential over that same course. Granted, the differential goes to +2 over the team's five-game unbeaten streak, but the team still stands at -4 for the year with 16 goals scored in 12 games. Not shabby, but not exactly high-flying stuff, either. Some of this has come down to a lack of good chances, and a lot has come down to 2009-vintage finishing from players in good positions. Hopefully, as the youth movement at RFK continues to mature and improve, so will the scoring. (Not to mention any midsummer transfers.)

Injuries  - They've started creeping in on us. Even forgetting the all-but-season-ending injury to Branko Boskovic to start off this Sixth, we've seen injuries to first choice players at no fewer than five spots on the field (both fullbacks, a central defender , a central midfielder, and both forwards). One of these years, the Black-and-Red will catch a break on the injury front. Until then, though, I much prefer Ben Olsen's "build depth" strategy for dealing with injuries to Curt Onalfo's "scientific training" plan to prevent them.

Optimistic. United have emerged from a tough stretch of the schedule  in a strong position in the Eastern Conference and on the edge of the playoff field with 2/3 of the season left to play. Moreover, the team is playing better now than they were at the end of the First Sixth. If this improvement keeps up, the good guys will be squarely in the playoffs with a chance to make a run at the Cup this fall. They're not there yet, but progress is occurring, without a doubt.

Let us hear your impressions in the comments.