The two-week road trip continues down the west coast tonight as the Los Angeles Galaxy play host to D.C. United. Since they became the first team in MLS to collect three points from the Portland Timbers in their home stadium, United could already consider this road trip a success against the only two previously undefeated clubs. Additional points tonight are just gravy.

Nah. That's a shitty way to look at it. We should expect more.

Landon Donovan and Donovan Ricketts will both miss this game due to international duty, but the Galaxy still have plenty of firepower with David Beckham, Juninho, and Chad Barrett all active. Meanwhile, Charlie Davies, the hero of the final minutes of the last match between these two teams, will return for D.C., while Dax McCarty will remain out, and will be joined by Dejan Jakovic, who departs for international hamstring duty.

Projected starting lineup: With Jakovic missing, Perry Kitchen is likely to shift back into a central role, with Uruguayan defender Rodrigo Brasesco the likeliest candidate to replace him on the right. Ethan White and Daniel Woolard will also reprise their appearances along the backline, while the midfield of Chris Pontius, Stephen King, Clyde Simms, and Andy Najar will probably be unchanged. The forward pairing is a bit of a question with Davies and Wolff both on their way back from injuries and Blake Brettschneider coming off a Rookie Of The Year type performance. I'm predicting we'll see Davies and Blakebrett at the start.

D.C. will debut its red jerseys tonight. And I'm debuting a new game here at B&RU too. Its called: "What should I drink?" To give you a background, I just returned from vacation, my wife is at the NKOTBSB concert, my daughter is asleep, and I've already drank two Sierra Nevadas. The options are below: 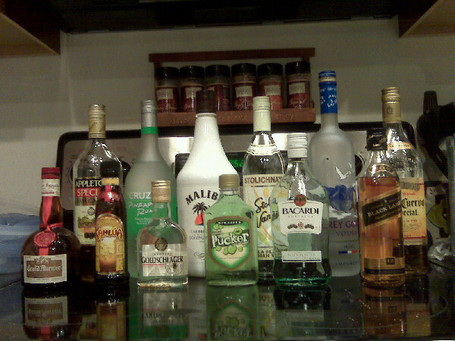 This is your place for pre-game, in-game, and post-game discussions, as well as cocktail suggestions.