The First Sixth: In Which We Discuss Rebuilding

Share All sharing options for: The First Sixth: In Which We Discuss Rebuilding

Ladies and gentlemen, welcome (back) to a new feature here at B&RU: The Sixths. In a past life, Martin liked to break D.C. United's  30-game season into six digestible chunks, analyzing each on its own. Kind of similar to how NFL analysts like to break that season into 4-game quarter-seasons, only with sixths. Well, with Martin's encouragement, I've decided to bring the feature back and take it over for 2011.

Of course, MLS has now expanded to a 34-game calendar, and "The Seventeenths" just doesn't have the same ring to it as The Sixths. (Don't even get me started on "The Five-2/3ths," which I entertained for about that many seconds.) So, we'll just shoehorn the awkwardly-numbered schedule into our mold and pull these features out at approximately appropriate times throughout the season- I'm nothing if not stubborn.

Standings:  Currently sixth (how apropos!) in the East, 4 points out of first; eleventh in league, first team out of the playoffs by goal differential

Leaders:  Charlie Davies (5 goals, tops in the league), Chris Pontius (2 goals); four tied at 1 assist. Interestingly, nobody who has scored has an assist (and obviously vice versa).

MVP of the Sixth:  For me it has to be Davies, who leads the race for the Golden Boot and has provided speed and danger for the offense. I'm not even sure anybody else is in the conversation.

Defining Moment:  Oh, come on, now. This one is easy: Charlie Davies stepping to the penalty spot  in the home opener and declaring to the world that he's back. United went on to win the game 3-1 in front of a jubilant RFK crowd , and Davies gave one of the most emotional and moving post-game interviews  I can remember. I feel pretty lucky to have been in RFK that night.

After the jump, we'll get into the somewhat surprising most common lineup, as well as the pluses and minuses of the First Sixth of United's first campaign as Olsen's Army. 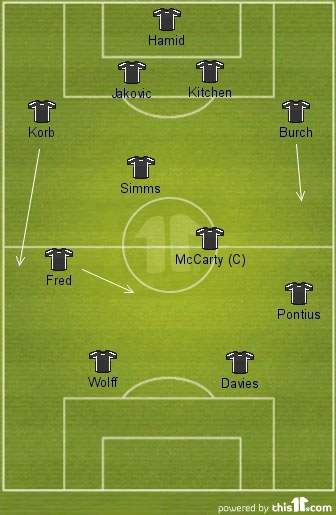 Formation-wise, it's exactly what we thought we'd see coming into the season: 4-4-2 to the core. There was actually quite a bit of flux for a few positions during the six games of the season so far, most notably (and surprisingly) right midfield, where Andy Najar , Santino Quaranta , and Fred da Silva each started two games in the spot. Naturally, this is not one of the positions  we highlighted as a focus  for competition this season . C'est la vie. I gave Fred the nod here because of his greater number of appearances as a sub and because he finished out the sixth as the starter there. I know - I'm as surprised as anybody.

Less surprising was the ascendence of United's #9, Charlie Davies, who began the year on the bench. Olsen has managed Davies minutes this season, keeping them to 45 at a time to start the year and working them up to the full 90. Davies has been really grown up about the rationing, admitting that he'd probably have hurt himself had he tried to come back to games all at once. Mostly great performances from the U.S. international, and as importantly, a great attitude.

Another interesting development - or lack thereof - has been Branko Boskovic's  failure to really crack the First XI through the first six games. United's designated player has ridden the pine for most of the season so far, a situation I'd expect to change starting with the first game of the Second Sixth (this Friday at Houston).

Update: Maybe not so much with Boskovic starting after that mugging he got in Boyds. He is scheduled for an MRI today.

Positives from the First Sixth:

Offense  - United managed to find the net 9 times in the First Sixth, on track for 51 goals on the season. That's more than twice as many as they scored in 2010, even without counting the four extra games added to the calendar this year. The boys in black have shown the ability to score goals in bunches, but they also can fade into shades of 2010, looking toothless and unthreatening for long stretches. Right now, though, we're going to focus on the scoring in bunches part.

Rookies  - We knew Perry Kitchen was the real deal coming in, and he showed his skill and leadership in the season-opening 3-1 win over the Columbus Crew . What we didn't know was that Chris Korb and Ethan White would turn out to be immediate impact-types. But that's exactly what they are, with Korb cracking the First XI at right back and White probably surpassing Rodrigo Brasesco for the #3 center back slot on the depth chart (for now). If these guys can continue their improvement rate through the season, we're looking at a very, very good defensive core for United in the future.

Fight  - This truly is Olsen's Army, and that much is clear from watching this team play from behind. The results aren't always there yet, but United keep digging and fighting when they go down a goal, and that's the least you can ask for as a fan. We didn't see that last year - heads would drop, and everybody in Black-and-Red went into "here we go again" mode. We saw shades of that after the Rapids' second goal in Colorado, but I'm chalking that up to altitude and the fact that United had spent the first 70 minutes pressing in a manner that was tiring to watch, let alone perform. And, besides, that's been the exception, not the norm. This has been the part of Dax McCarty 's game where the Ginger Ninja has been most successful - the guy's all over the field, breaking up opponents' attacks before they start and cycling the ball to United's more creative wing players.

Negatives from the First Sixth:

Growing Pains, Part I  - This is the flip side of being such a young team - United are prone to defensive lapses and let-downs. It happened in the last 20 minutes in Colorado, and it happened in the Red Bulls game. It keeps almost happening (sometimes without the almost) when the Black-and-Red defend set pieces. This is something that should be drilled in practice every day for the rest of the season.

Growing Pains, Part II  - United saw a lot of roster turnover from last year's historically futile season. Which is about right, considering last year's historically futile season. Chemistry is something that comes with time playing together, and it's going to take longer than six games to figure that out with all the new faces in the locker room. That said, it certainly hasn't helped that two of United's most dangerous midfield threats have spent most of the season so far on the bench, failing to earn starts in the majority of games to date. Both Branko Boskovic and Andy Najar missed out on First XI status for the First Sixth, though both look set to make a return to the starting lineup (especially after shining in last nights US Open Cup defeat to the Revolution, though it appears that we may be without Boskovic's services for a while longer after the Revs apparently took turns hacking him with machetes and sledgehammers). This is also the area where the guy wearing #10 hasn't been as successful; Dax McCarty is playing in a central midfield role and sometimes finds himself without influence going forward. Personally, I'm willing to cut him some slack; dude was not brought in to be the next Etcheverry or Gomez. Of course, it would be great to see some offensive production from the former FC Dallas player.

We are who we thought we were . You can see the promise in this team, but the work that will be necessary is also readily apparent. We've said all along that United will have their struggles this year but we expect them to be playoff contenders come October. After a small sample, they look to be right on track. That said, the team has obvious weaknesses and will need to grow and improve over the rest of the season. Like I said at the start of the year, it should be fun to watch.

So, what do you think about the season so far? Are United on track, or are the defensive lapses and bad losses signals that panic is called for? Am I going too easy on the Man Called Dax? Let me hear it in the comments.