This is the fifth in a recurring series where we look at the DC United season, five games at a time. 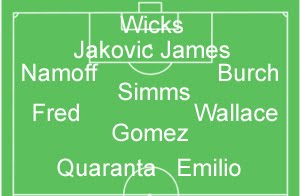 Defining moment: The moment that sticks out to me most clearly from this five-game stretch is unfortunately the handball by the LA Galaxy that was not called. And that was after Emilio was shoved over in the box earlier in the match. Maybe someone could debate the foul on Emilio, but the handball was indisputable, and it was even used as an example of a bad call by the USSF. We saw so many non-calls in that match that I think we may have won if only a United player could have picked up the ball and ran rugby-style into the goal. Anyways, a penalty kick in the 85th minute of a scoreless game would have virtually guaranteed us a victory, and two extra points in the standings sure would have looked nice about now.

Overall impression: Last time I wrote the following: "United's 1-2-2 record in the fourth Sixth is a bit misleading, because this stretch of the season also included three Open Cup victories to return DC to the Final, and a home-and-home series victory over Firpo to return DC to the Champions League group stage." This time its exactly the opposite. United had a winning record through the fifth Sixth in MLS action, but while also losing two CCL matches and the Open Cup Final. Despite our current place in the standings, United remains in a precarious position because every other team but one has played fewer matches than us. But with four out of the last five matches at RFK in front of its adoring fans, DC definitely is in control of its own destiny during the final playoff push.