Share All sharing options for: Clyde Simms versus Julius James

I started writing this as a reply to the comments in the last match reaction, but I figured this discussion worthy of its own posting, and what better format to use than my infamous Versus feature.

The theory here is that one of these two players will be starting next to Dejan Jakovic when the Canadian returns from hernia surgery. The team has apparently fully abandoned the 3-5-2 formation, as they rightfully should have, and our regular center back pairing in Jakovic's absense has been Simms and James. So which one should start next to Jakovic for the final few weeks of the season (and maybe the playoffs??)? Let's look at what each one brings to the table:

Clyde Simms has been one of our most consistent players over the past three years, and brings a much higher soccer IQ to the backline than does James. He may not be the same physical specimen as James, but he should bring better positional sense, while still having the speed and strength to keep up with the better attackers in the league. My initial concern with using Simms at CB is that we lose his ball-winning ability at CDM, but that doesn't seem to be as big a concern anymore since Rodney Wallace has really stepped up to fill that role while Simms has been playing deeper back. So the argument against Simms then is Fullback's point that with Simms and Jakovic you have two players who like getting forward into the midfield too much to close down attackers early. My rebuttal is that with Simms and Jakovic, we have two intelligent and experienced players who should know when to go forward and when to stay home. I feel like when one of them moves forward, the other will always be smart enough to stay home.

Julius James is probably one of the two or three most physically gifted players on the team. He's faster than Simms, he's bigger and taller than Simms. James definitely has potential, as Fullback pointed out. But the time to get him more seasoned is not the final 4 games of the season. I'm all for bringing James back in 2010 and letting him compete for a starting job at that point, but for the remainder of this season, I want the two best players RIGHT NOW playing this spot. One of United's biggest problems in 2007 and 2008 was that they suffered from mental errors. Whether our backline was McTavish-Boswell or Peralta-Janicki, we had a tendency to play well for about 88 minutes of a match, but give up a goal or two thanks to some isolated mistakes. We've already seen the same thing happen with Julius James starting.

I'm not saying that Clyde Simms should be starting at central defense long term. He's just too good a defensive midfielder to permanently convert. But for the remainder of the 2009 season, I'm all for starting our best 11 players. And I don't think James is in that best 11 right now. My best 11 looks like this: 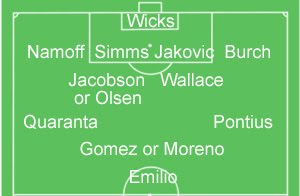 Yeah I've still got Emilio at top. That might be an argument for another day ;)