I wrote a couple of weeks ago that DC United will play more matches than any other MLS team this season. I figured it wouldn't be a bad idea to back that up with some numbers: 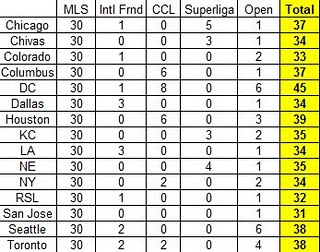 Read into that what you will.

For clarification though, this chart does not include the previous year's Champions Cup matches that Houston played prior to the start of the 2009 MLS season, or any other preseason matches.