This is the fourth in a recurring series where we look at the DC United season, five games at a time. 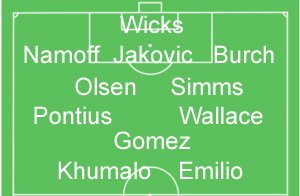 Defining moment: I've got two of 'em. Bryan Namoff's own goal, followed later in the same match by his diving header against Colorado at home. These two goals epitomize the back-and-forth nature of four out of the five games we faced in this stretch. Namoff's resiliency was what propelled the team to a win in that match, and we saw that same sort of resiliency two weeks later from Emilio, coming off the bench with a head of steam to bring us one goal away from tying Houston after being down by 3.

Overall impression: United's 1-2-2 record in the fourth Sixth is a bit misleading, because this stretch of the season also included three Open Cup victories to return DC to the Final, and a home-and-home series victory over Firpo to return DC to the Champions League group stage. These wins have now guaranteed that DC United will play more matches within the 2009 season than any other MLS team. DC will play 45 matches (not including preseason), while the most any other team will play is Houston with 39. There's certainly pros and cons to that fact. Fatigue will be an issue during much of the playoff push over the next two months. But when the CCL and Open Cup are all over, our players should be in better shape than anyone else, and the international experience should benefit these guys for years to come. As for making the playoffs though, a lot is going to depend on the form of some other clubs. There is some new competition out there from teams like Toronto, Seattle, and Colorado who aren't normally in the MLS playoff hunt, and if they can maintain consistency, we could be in for a tough fight at the end of the season. I can see already some potential must-win matches in our future (10/3 Chivas, 10/17 Columbus).