This is the third in a recurring series where we look at the DC United season, five games at a time. 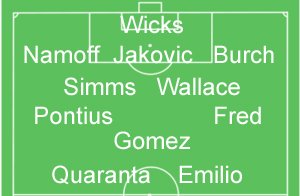 Defining moment: Josh Wicks' penalty kick save on Brian McBride to preserve United's lead against Chicago and move back into our rightful position in first place. A major theme of this sixth of the season would have to be Wicks' heroics, including several spectacular saves and two clean sheets.

Overall impression: After the second sixth of the season when we finished tied for first place, it didn't really feel right. United wasn't playing like the best team in the Eastern Conference at that time. Now though, I think we deserve it. Closing out the first half of the season with a huge victory over Chicago and a tie at Seattle should provide the team with steady momentum as we head into a rough portion of the year that includes Open Cup and Champions League matches in addition to the regular season