This is the second in a recurring series where we look at the DC United season, five games at a time. Of course I failed already because I miscounted and should have written this one last week, so this post is through the Chivas match, and does not include the scoreless draw with RSL.

Standings: Tied with Toronto FC for first place in the Eastern Conference 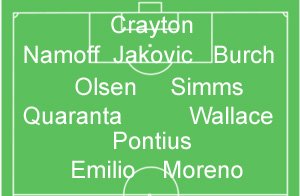 Defining moment: Chris Pontius's extra time goal to defeat the Red Bulls, just seconds after Emilio had tied the score. There wasn't a whole lot of skill to this goal, just a whole lot of hustle, from Pontius as well as Khumalo. This goal is a reflection of the excitement of the end of just about every match in this sixth of the season.

Overall impression: In the second sixth, DC United has shown an uncanny ability to come from behind late in games. And while that's admirable, and certainly exhilirating, it begs the question as to why they are so often in the situation where they need to come from behind. With one of the best offenses in the league, if the team is able to limit mistakes just a bit better, they are a legitimate championship contender. And those late game heroics could serve the team well in the playoffs.