Share All sharing options for: Marc Burch versus Avery John 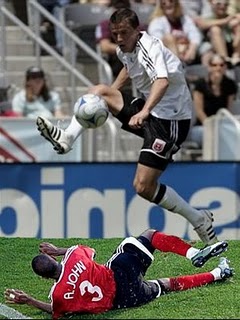 We've seen debates emerge a couple times over the past few weeks as to who should be our starting left back. The reality of the situation is that Tom Soehn is likely to continue rotating players at just about every position for the foreseeable future. Marc Burch and Avery John each started one match last week, and they're probably going to continue to split time as long as both are healthy. But who should be our #1 top choice at that spot? Let's break it down…

1. Burchie-bomb - Although we haven't seen much of Burch-from-distance yet this year, he is much better in the offensive third than John. Whether crossing the ball from the left flank, or taking a free kick, Burch's left foot remains to be one of the most dangerous weapons on the team.
2. Educational background - Marc Burch graduated from the University of Maryland the same year that I did. That's got to count for something.
Negatives:
1. Consistency - Burch has been known to put together 85 solid minutes, but if you take one play off, that could be one goal for the other team. The only thing consistent about Burch is him getting beat for headers by Dax McCarty.
Avery John
Positives:
1. Experience - While age can be both a pro and a con, the 33-year old John has seen it all. And with 65 caps for the Trinidad & Tobago national team, John is second only to Moreno in international experience.
2. Position - John was the starting left back for the Revolution team that went to the MLS Cup Final three years in a row, and that was a 3-5-2 system.
Negatives:
1. Lack of chemistry - John has been with the club for less than a month, and has only made one appearance so far. With a defensive unit that already occasionally struggles with communication , it might take a little while for him to fit in.
2. Fouls - One of John's most commonly used defensive tactics is the foul. That can put the club in a tough spot sometimes.
So in conclusion, I'm giving the starting job to Burch because he has more positives than negatives. Yes, namely because he's a Terp. Now there's some expert analysis that you won't find in any other blog in the country!