Share All sharing options for: Louis Crayton versus Josh Wicks versus Milos Kocic 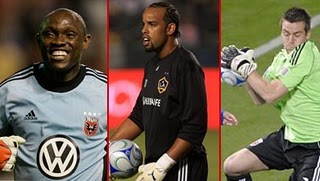 Let's try out a different format this time for my much heralded "Versus" series. Here we'll take a look at each of our three potential starting goalkeepers (Louis Crayton, Josh Wicks, and Milos Kocic) on a number of different categories to see if we can come up with a consensus.

Stats to date:
Including Open Cup matches, these three aren't too different. Each has exactly one clean sheet. Crayton and Kocic both have a 1.33 GAA, and Wicks has a 1.50 GAA. But if it wasn't for Janicki's hand ball in the NYRB Open Cup match to set up a penalty kick, Wicks' GAA would have been 1.25, so this is a wash.
Crayton 0, Wicks 0, Kocic 0.

Shot-stopping:
Over the past year or so watching Crayton, we've seen him make a couple real good saves here and there. But I can also recall a few instances where he leaned the wrong way or was caught out of position. Wicks did have a great one-on-one save against Robbie Findley over the weekend, but the sample size is too small for him and Kocic to make a real determination.
Crayton 0, Wicks 0, Kocic 0.

Distribution:
I really haven't noticed any of our three goalkeepers being either substantially good or substantially bad at ball distribution. Agreed?Crayton 0, Wicks 0, Kocic 0. Communication: Tom Soehn has said himself that Wicks is the best communicator of the bunch. Kocic's struggles with communication seem best exhibited by his failure to call off Jakovic on a De Rosario goal earlier this month.
Crayton 0, Wicks +1, Kocic -1.

Game-changing ability:
My biggest criticism of Crayton over the last year has been that he always seems to do just enough to be considered a decent MLS goalkeeper. He makes the saves he's supposed to make, and very few goals against are really seen to be his fault. But rarely does he set himself apart by making big saves that no one would have expected him to make. Meanwhile, according to Soehn following Wicks' shutout of RSL, "This is the first time someone stepped up. ... He made some key saves at key moments and he managed the box well, he communicated well. It was the first time that someone separated themselves a little bit and said, 'I want this job.' "
Crayton -1, Wicks +1, Kocic 0.

Experience:
Louis Crayton has started 36 games for the Liberian National Team, and played for multiple European teams before coming to the US. Milos Kocic is a rookie. Enough said.
Crayton +1, Wicks 0, Kocic -1.

Salary:
While I don't believe that money should weigh very heavily on a decision for such an important position, if all else is equal, it could be the deciding factor. Crayton is set to make $178,000 in 2009 to Wicks' $42,000 and Kocic's $20,100. I'm not going to count this as a plus for Kocic though because I have a feeling the team would give him a bump up to a senior contract if he were to win a starting job, if the team's history is any indication (Burch and McTavish circa 2007).
Crayton -1, Wicks 0, Kocic 0.

Wow, that actually wasn't as close as I thought it would be. We should be careful though because the sample size is still too small on Josh Wicks for us to make a drastic movement. And it's hard to forget that he was cast off by the Galaxy of all teams not more than a year ago. But if Soehn's recent comments hold true, it looks like Josh Wicks is on his way to separating himself from the pack and winning the starting role. Is he the long term solution though? That's another debate entirely.

Any categories that deserve consideration that I missed? Feel free to argue with any of my findings in the comments section.