Jealous of the Washington Capitals

Share All sharing options for: Jealous of the Washington Capitals 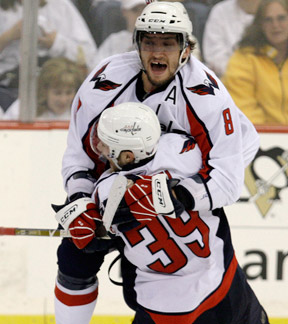 Yeah I'm jealous of the Caps, and it's not just because they're actually winning playoff games. The Caps are the biggest story in town these days, and rightfully so. Every casual sports fan in the DC area that I know has started following the Caps. And that's awesome. I'm one of them. I grew up watching the Caps, going to a couple games a year, but haven't paid attention to them for the last decade or so, until the second half of this season. But now with the Capitals forcing game 7 against the Penguins, the Caps are winning new fans all over town and their popularity is soaring.

What does DC United need to do to get this kind of attention? They've dominated regular seasons in the past. They've won championships. But never have I heard this kind of buzz about United.

I researched some attendance numbers and was actually surprised to find that United typically averages higher attendance than the Caps. The biggest disparity was in 2007, when United's average attendance was 20,967, while the Caps' was only 13,929. But throughout the first half of this decade, both teams have averaged right around 15-16,000 or so. Unsurprisingly, the Capitals had their highest average attendance ever in 2009 with 18,097. Obviously a lot of those numbers have to do with the differences in arena/stadium sizes, but it's still some interesting data.

But I don't think attendance numbers really tell the whole story. Maybe yearly tv ratings would be a more meaningful gauge, but what I'm really talking about isn't quantifiable. What I'm talking about is BUZZ. Everyone in my office tomorrow morning will be talking Caps/Pens.

I think it's all about marketing. Luciano Emilio was the MLS MVP in 2007, yet the casual sports fan in DC has never heard of him. Because the team isn't covered heavily in the local papers or on local news channels. That's not easily fixable, but if I'm working in United's marketing department, I'm shoving Chris Pontius and Rodney Wallace down the local sports directors' throats right now. We have some of the most exciting soccer players in the US on our roster right now, young and old. It's about time for the general population of this area to start taking notice.