There's been surprisingly very little debate this year about how we should line up for the Open Cup, which starts tomorrow against Dallas. In years past, we used to have heated arguments about the Cup's virtues vis a vis the MLS regular season, and whether the club should start its best XI, or start the reserves. This year the consensus seems to be pretty clear in favor of getting our reserves some action. For a couple of reasons I think. For one, in 2008 after two consecutive Supporters' Shield winning seasons, I think we'd gotten a little bit complacent with regards to regular season matchups. But now that we've seen that DC missing the playoffs is a very realistic possibility, it's a whole lot harder to take those regular season games for granted. And secondly, with MLS abandoning the Reserve Division in 2009, this might be our first opportunity to see a few new players in action.So I'm 100% on board with playing our reserves, and if they aren't better than Dallas's reserves, so be it.

Here's the lineup I'd like to see tomorrow night: 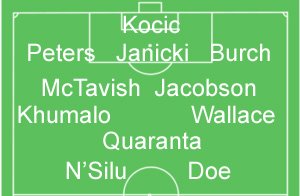 I don't know enough about Barklage or DiRaimondo to figure out where they might fit in here, but each could be a second half substitute option. Also, the lineup we see tomorrow might be a sign of who will be sacrificed to free up a roster spot for Avery John in the next couple days. If Anthony Peters doesn't get a start in this match, then his days with the team are surely numbered.