As promised, this is the first of a new recurring feature here at the DCUMD blog. In the NFL, coaches and analysts often divide the season into four quarters when discussing how their team is doing. For example, the Redskins were a good 3-1 in the first quarter of their season, but finished 1-3 in their fourth quarter. In the MLS though, it's a little bit more complicated because 30 games doesn't easily divide by four. So I figured it would work out just as well to break the season into sixths, and we'll reflect back after the conclusion of each sixth to see where the team is standing. This will allow us to take a different perspective on the season and to track our thoughts on the team as the year progresses.

Standings: Currently in fourth place in the Eastern Conference 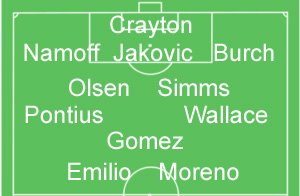 Defining moment: This image says it all. The first sixth unfortunately was defined by Devon McTavish and Greg Janicki bumping heads while defending a Galaxy attack, and leading to two quick goals within the next 10 minutes as DC scrambled to adjust. The season to date can be summed up by DC United outplaying their opponents, but still giving away points unnecessarily.

Overall impression: At fourth place in the Eastern Conference, DC United is just about where we all expected them to be for most of the year. No longer the elite team in the league, but still very much in the thick of things. From what we've seen in the past five games, DC might be better than their record shows. But we need wins, not just solid performances. For example, at the conclusion of the first half of the Revolution game, all of the ESPN analysts agreed that that was the best half they'd seen out of DC all year, yet the game was scoreless. In each of our three ties, we had chances to put the game away and gain an extra two points, but either failed to convert our scoring opportunities, or failed to shore up defensively. Until United can start to grind out some victories rather than settling for draws against teams they can beat, this season may be likely to end in more disappointment.