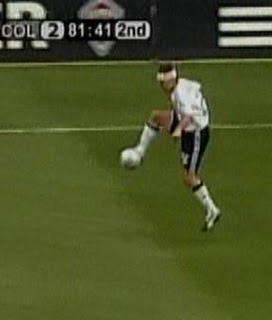 In the first match between the two players who will be linked in the minds of DC fans for the rest of their MLS careers, Christian Gomez dominated United and Gallardo with two assists. Even Facundo Erpen scored a revenge goal, in a match where he had shockingly zero bicycle kicks.

1. Bryan Namoff - Had a couple goal saving tackles, and looked totally badass with the bandage over his head in the second half.

1. Francis Doe - His first touch of the game, he got the ball around midfield, carried it all the way up the left sideline with three Colorado players on him, and won a corner kick. He then immediately went into the locker room and was never seen again. At least as far as I could tell.

1. Let's just make this simple and list the entire midfield. Marcelo Gallardo, Clyde Simms, Rod Dyachenko, Santino Quaranta, and Marc Burch - Gallardo was ineffective, not even challenging the keeper on corner kick or free kick attempts. Simms seems out of place in the 3-5-2. I like him better in the bruiser role in the 4-4-2. Not sure he knows what to do with himself with Dyachenko next to him. Speaking of the Russian, I don't think he had as poor a game as a lot of the overreacters on the Insider are claiming, because he did win two free kicks in good spots, but he also gave the ball away a lot. Quaranta kept up the hustle, but did nothing on offense. Burch played alright, but his crosses were always off the mark.

So despite playing with one more midfielder than the opposition, we were still dominated in the middle third. That right there is a really bad sign. But a worse sign is that Soehn continues to roll out the 3-5-2 regardless of the situation. Coaches always talk about how its important to be able to play successfully in more than one formation. I believe we have the team to be able to do that. So why not take advantage of our personnel and tailor the formation to the situation. Playing at home against a team that is weak offensively: that's a good time for the 3-5-2. But playing on the road against a team with a proven (and vengeful) MVP leading the attack, in a game where we would probably have been happy with a nil-nil draw: not a good time for the 3-5-2.

Also, with Chivas's 0-0 draw against Houston yesterday, DC United is now officially THE ONLY team in the league without a clean sheet. And with Blanco, Rolfe, and Chicago coming to town in just four days, it's hard to be confident. But now I've also done a bit more research and stumbled across another jaw-dropping stat. DC United is also THE ONLY team in MLS with no away goals.

It's not really hard to see where the team should go from here. The injuries to Olsen, McTavish, Fred, and Mediate are certainly cutting down on our options. But still, I feel like we're all just sitting here, waiting for the chemistry to develop on its own. Well we've been waiting for almost two months now. How much longer is it going to be? For me, I'd like to go back to the proven strategy that worked so well last year. It's simple, really. It's Burch and Namoff as the wing backs, with two regular starting center backs, but with an occassional rotation of McTavish into that position. It's Clyde Simms as the lone defensive midfielder, behind our #10, with Fred on one wing and Olsen on the other when he's healthy, and any number of other talented options when he's not (Quaranta, McTavish, Mediate, Kirk). And of course, it's the Godfather of Goals and the Golden Boot winner up top. We're out of the crowded portion of our schedule, so I think that with a single solitary starting lineup, with only minor changes when necessary, we will see the chemistry develop much quicker than we have with the frequent changes that we've seen over the past two months.

It will be hard to overcome the negative though in a short week of practice before a game against a quality Chicago opponent. So for now, I pose the following question to the public... Which stat is more troubling... That DC United has ZERO clean sheets, or that DC Untied has ZERO away goals?