How come this year we had two draft picks from the Big East (Cordeiro-UConn, Stratford-WVU) and two from the Pac-10 (Jacobson-Cal, Owens-UCLA), but not a single player from the ACC? So Maryland and Virginia aren't good enough for DCU anymore? I see how it is.

I know I probably just sound bitter, given my blog's namesake, but how do you pick Ryan Cordeiro when Stephen King of Maryland is available? King was a first-team All American, finished his career at Maryland ranked second all time in assists, and has had several call-ups to the U23 national team. Burchie and Dom certainly would have welcomed another Terp to the team. 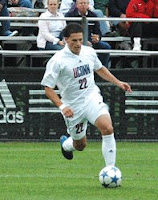 Instead, United selected forward/midfielder Ryan Cordeiro, a guy who some experts referred to as "a disaster pick." Cordeiro finished his career at Connecticut with 18 goals and 19 assists, and was second team All-Big East in 2007.

This is usually the type of player that United tries to convert to a defender, but so far in the two scrimmages, it looks like Cordeiro has been a second half winger in each game. With so many guys like Kpene, Dyachenko, and Moose turning 25 this year and losing their "Developmental" status, Cordeiro has a good chance of making the roster. Actually, Moose looks to be the best comparison as far as I can tell, because he's an attacking guy who doesn't play too much defense. But hopefully I'm wrong and Cordeiro will turn out to be more well-rounded, like a Mediate.