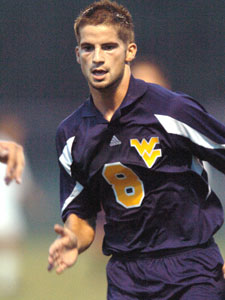 United's second pick in the Supplemental Draft went to a British player from WVU (a Britaineer??) named Dan Stratford.

Big question for DC United fans is… Does he have a green card? Because all of a sudden we're getting pretty low on foreign player slots. From the little I've read on Stratford so far, I'm thinking he does not.

Let's review the roster real quick… Out of 8 possible foreign slots, we've got Emilio, Fred, and Gomez (or Gallardo). And newcomers Martinez, Niell, and Peralta. Carvallo supposedly has a green card, and I tend to believe it because I think DC probably would not have brought him in if he did not. Just like I think they wouldn't draft Stratford if they didn't have a foreign slot remaining. So we should be good on that, just without much room to maneuver on the foreign market during the course of the season.

Stratford was a standout at WVU, playing alongside a young Devon McTavish for a couple of years. He ended his career with the most assists and most games played in school history. A quote from head coach Marlon LeBlanc: "United saw him play and saw Dan score the game-winning goal against then-No. 6 Maryland in overtime in College Park, Md. I think that turned some heads."

I won't hold it against him.

Sounds to me like Danny Stratford could give Rod Dyachenko a bit of competition for the starting CAM role on the Reserves. And with an aging Gomez (or Gallardo), whoever is that second string CAM could be getting some important minutes in some important games. Or even better… I wonder if he can also play on the wing???