You all know that I've been one of Gomez's strongest advocates since starting this blog. I would still to this day pick Gomez over Veron if I had a choice, because Gomez fits our style of play so well, and the team would have had to be restructured in my opinion to work with Veron.

But now it's a different internationally reknowned Argentinian in the conversation, and I'm not sure if I still feel the same way.

Regardless, I hate to see Christian Gomez leave. I was not one of his biggest fans in 2005, as I thought a lot of people were too quick to look to him to be the second coming of Etcheverry. But as it turns out, Christian may have been the best player in the league over the past three seasons, and was certainly our team's MVP each of the last two years, despite Lucigol's scoring title. I've been strongly advocating the return of Gomez because he is a known quantity in leading our attack. He's pretty much a shoe-in for 10 goals and 10 assists each year. 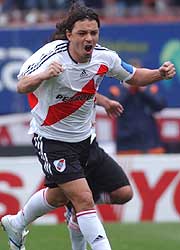 And then enters Marcelo Gallardo. The #10 jersey won't be unoccupied for long with Gallardo supposedly arriving in DC today to finalize a deal. Gallardo is a playmaker like Gomez, not just a holding midfielder like Veron would have been. He can finish as well as Gomez, if not better. Gallardo lit up the Argentinian first division when he returned to River Plate from 2003-2006, with 25 goals in just 77 matches.

But Christian Gomez had something when he played here that no one else in the league had, save for maybe De Rosario. He had the ability to put the team on his back and just WILL them to win. He'll even knock the ball in the goal with his freakin' hand if that might give United a chance to win. I guess what I'm trying to say is... The dude's got heart. And he plays his ass off. Hopefully Gallardo will too.