Share All sharing options for: Peace out, Bobby Lightning 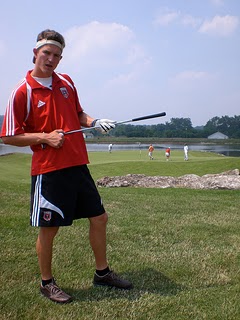 If there was ever a guy that you knew would keep in touch with the club and its fans after his departure, it's good old Bobby Boswell. I'm sad to see him go, because he was certainly a character and made the team a little bit more fun to follow, but at the same time, I don't begrudge him at all for wanting to leave, and I don't begrudge the club for moving him.

I worry a bit though that this trade happened a bit too fast, that we may not have gotten everything that we could have gotten. At least it certainly feels like after the Cannon trade fell through for whatever reason, United just went ahead and traded for the next best goalkeeper available. But I have a theory that there was a reason that United acted so quickly. They know that San Jose has yet to pick up a keeper, so we should keep in mind that United might not have been the only team in the running for Zach Wells. They were just the only team in the running that had much of anything to offer.

All things considered, it's probably not a bad trade for us. It sucks that we're losing Bobby, and Wells has some upside and he's cheap, but it's doubtful that he will be as stout as Troy Perkins. But when you consider the fact that Perkins is going, and that Boswell wants to go, this probably is a decent move for us. But damn, it's an f-ing GREAT move for Houston! They already lost Ryan Cochrane in the expansion draft, but I'd consider Boswell to be an upgrade over Cochrane. Wouldn't you? So they upgrade at center back and all they have to give up is a backup goalkeeper with only 4 appearances this year? Oh and a second round draft pick? I'm not going to say DC lost in this trade, but Houston definitely won.

Anyway, I join the rest of the DCU community in wishing Bobby loads of luck in the future. I for one have no intentions of removing his website from my favorites.