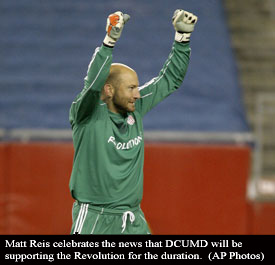 Let me preface this by saying that I hate doing this. But sometimes if you want to be right, you've got to pick against your team. I've been a Redskins fan all my life, so I'm used to it.

I've been a reluctant Revolution fan for only about 72 hours now, and I'm already having my doubts. As much as I'd like to see them just get it over with already and win an MLS Cup, I don't think it's in the cards for them. And it's not because they're not good enough.

It's because Chicago is just too good right now. The Fire are exactly that.

They are hitting their stride at the most perfect moment. DC United was the best team in the league for about 9 out of the 10 month season, but right now I think the Fire might have that title. If Chicago can beat a great team in United, how could they possibly lose to a mediocre team like the Revs?

Juan Carlos Osorio is a great coach. I've sort of joked about it before, but he really could have a future as the USMNT coach someday. His adjustments throughout the 180+ minutes of soccer in the United series proved it. The Fire's tactics may have been ugly, but they were effective. Even our boy Jaime Moreno said "that's not soccer."

So my prediction is Chicago with a 2-1 victory. Both goals in the first half, and New England gets one late trying to come back. Let's hope I'm wrong.